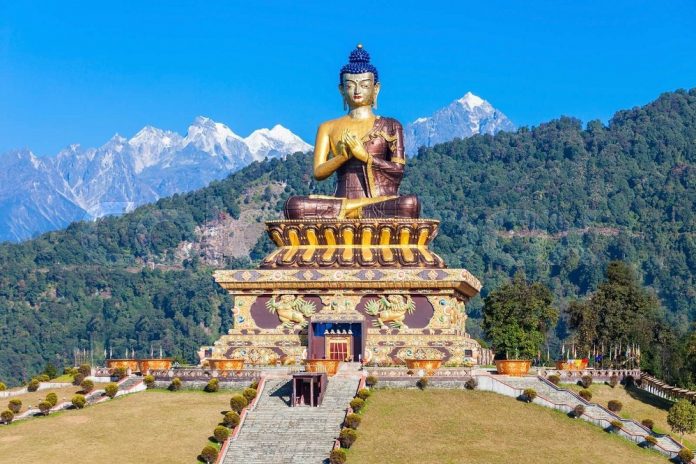 Sikkim, the northeast’s hidden jewel in the midst of all the beauty, welcomes visitors from all over the world to come and experience the many hues of nature.

This tiny state surrounded by three international borders of China, Nepal, and Bhutan and one national border of West Bengal provides something for everyone, whether you’re an adventure seeker, a leisure tourist, or someone looking for spiritual enlightenment.

Sikkim is home to well-known Buddhist and Hindu pilgrimage sites owing to its rich and ancient tribal culture narrating mythological legends and anecdotes.

The numerous Monasteries and Temples found throughout the state make this picturesque Himalayan region a must for religious pilgrims. Furthermore, scores of spiritual travelers visit this region every year by booking custom Sikkim tour packages, for the magnificent blending of Buddhism and Hinduism.

So let us take you on a spiritual journey in the magnificent northeastern state of incredible India.

The famed Ganesh Temple is situated on a mountaintop in Gangtok.

The famed Ganesh Temple is situated on a mountaintop in Gangtok. Sikkim’s majestic capital is known for its breathtaking natural beauty and a number of important pilgrimage sites.

Although the temple is of a tiny scale, it is one of Gangtok’s most revered temples. The multicolored flags that are the temple’s trademark are displayed along the path to the temple.

Because the temple’s entrance is limited, only one person can enter at a time and receive Lord Ganesha’s Darshan. Perched on the hill, the temple offers an outstanding panoramic view of the Gangtok city as well as the view of the Khangchendzonga Mountain.

The Lord Ganesha temple is the most-visited holy place in Gangtok for offering prayers and receiving Darshan.

Hanuman Tok, also known as Hanuman Temple, is a temple in Gangtok. The calmness and peace that surround the temple are so alluring that you will want to stay there for long.

Another Hanuman Temple, erected by the Indian Army, may be found in the city. Visitors are mesmerized by the picturesque grandeur enveloping the Hanuman Tok Temple.

Hindus, as well as other tourists visiting Gangtok, must go to this temple to see the astounding natural beauty and feel the calm that surrounds it.

The Kanchenjunga Mountain range may also be seen from here, adding to the area’s splendor. The temple is around 11 kilometers from Gangtok’s central city, on a side road of the Gangtok-Nathula Highway.

According to mythology, Lord Hanuman stopped here for a respite on his way back to Lanka from the Himalayas, bringing the Sanjeevani herbs to cure Lord Lakshman.

The Solophok Chardham, a newly built pilgrimage destination in Sikkim, was developed by the state government of Sikkim to increase religious tourism in the state.

This sacred site is situated on the top of Solophok hill in the gorgeous landscapes of South Sikkim. The backdrop of the Chardham temples covers 7 acres, with the main temple standing at the height of 108 feet.

The 87-foot-tall Lord Shiva idol, which sits meditatively at the top of the main temple, provides a magnificent perspective of the great Lord of Death.

The temple site houses stunning versions of all original twelve Jyotirlingas consecrated to Lord Shiva, as well as a 16.5-foot-tall idol of Lord Kirateshwar, another of Lord Shiva’s incarnations.

On-site amenities include VIP guest homes, dormitories, eating establishments, a cafeteria, and parking spaces. The temple complex is located 5 kilometers from Namchi town and is accessible by a well-maintained road.

The Kirateshwar Mahadev Mandir, located in Legship, west Sikkim, is a historical holy place Kirateshwar, a reincarnation of Lord Shiva in the shape of the archer. According to the Mahabharata tale, Lord Shiva veiled himself as a hunter to test Arjuna, the third Pandavaarchery,’s and subsequently blessed him.

Kirateshwar has been revered as the hunter god since then. A pedestrian bridge connects the main road to the temple, which is located on the bank of the River Rangit. The locals conduct the great Shivratri festival in February or March and the Bala Chaturdashi festival in November or December.

Sikkim is known as the “Territory of Monasteries” since it is home to numerous past and present monasteries. Sikkim attracts a huge number of tourists and followers of Buddhism ideology since it is a prominent Buddhism destination and home to a high number of Buddhists.

The Rumtek Monastery, one of Sikkim’s oldest and largest monasteries, is nestled in Gangtok, some 24 kilometres from the city. For Tibetan Buddhist pilgrims, this monastery is the most important Buddhist pilgrimage site.

Renowned for displaying several priceless ancient artifacts such as antique metal statues, gem-encrusted cenotaphs, and so on. In 1730, the monastery was erected by the 12th Karmapa Lama Changchub Dorje,

In 1966, the 16th Karmapa Rangjung Rigpe Dorje reconstructed and opened the Rumtek Monastery as the ceremonial abode of the magnificent Karmapa.

The Pemayangtse Monastery, another historic monastery in Sikkim, is one of the most important Buddhist pilgrimage sites and is situated close Pelling, about 140 kilometres from Gangtok.

The Pemayangtse Monastery, another historic monastery in Sikkim, is one of the most important Buddhist pilgrimage sites and is situated close Pelling, about 140 kilometres from Gangtok.

The Lama Lhatsun Chempo conceived and erected the monastery in 1705, and it has since been extended and refurbished several times.

The Pemayangtse Monastery monitors and controls the Nyingma Order of Tibet Buddhism’s other monasteries in Sikkim. The monastery’s design astounds visitors with its extensive collection of beautiful statues and artwork.

The magnificent monuments near the monastery’s entrance provide a wonderful viewing experience. The monastery’s stunning, attractive surroundings have made it a popular tourist destination.

In Sikkim, Christianity holds a special place, and there appears to be at least one attractive church in every town and city. Hope City Church and St. Thomas Church in Gangtok, Sacred Heart Church in Pedong, and St. Mary Roman Catholic Church are all popular Christian pilgrimage sites in Sikkim.

Nonetheless, Sikkim is home to a number of mosques, including Anjuman Islam Mosque and Barelwi Jama Masjid, as well as a number of Gurudwaras, including Nanak Lama Chungthang, Sarva Dharma Sthal, and Baba Harbhajan Singh Mandir.