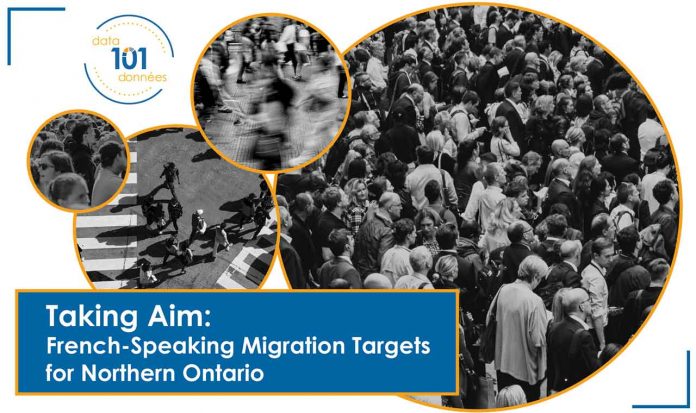 THUNDER BAY – ANALYSIS – To hit a target, you need the tools and know-how. The same can be said when planning for population growth – you need data and the knowledge of how to reach that goal. The latest series by Northern Policy Institute and Réseau du Nord, Taking Aim: French-Speaking Migration Targets by Mercedes Labelle is the tool for the job.

This series of papers projects how many future French-speaking and Francophone migrants should be targeted to maintain the current levels in Northern Ontario for these two groups. If Northern Ontario communities do not at leastmaintain the current share of French-speakers and Francophones in the core working-age population (through bothmigration and retention), there may not be an adequate supply of workers to provide services in French in the coming years. The Taking Aim series breaks down the needed in-migration targets on a regional basis, featuring 16 papers available in English and French.

In some regions and communities, the targets are small while others are quite large. Of all the northern districts, Cochrane needs the highest percentage of French-speaking and Francophone in-migrants to maintain current levels in their workforce, due to the already high prevalence of these populations. Rainy River was the lowest – around 3 per cent for both in-migrant groups.

“Community growth and prosperity is not just economic, it is the diversity of cultures and experiences too,” says Thomas Mercier, Coordinator at Réseau du Nord. “To ensure continued demand for French services and to fill future labour market gaps, planning out next steps is critical.”

To support targeted attraction and retention efforts, communities can work within existing programs, like the Rural and Northern Immigration Pilot or the Francophone Welcoming Communities Initiative, and develop new initiatives, to encourage French-speaking and Francophone migration. In addition, the regions of Northern Ontario should continue working towards creating welcoming communities for individuals that are calling Northern Ontario home for the first time, and for individuals who already do.