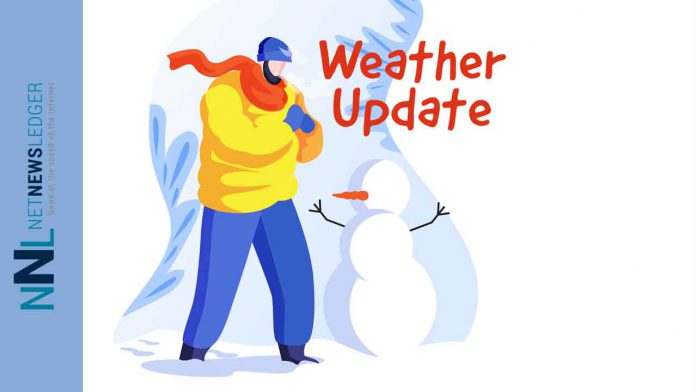 TORONTO – WEATHER – Winter weather is headed into Southern Ontario. It is likely to impact travel into the city, and air travel across Canada.

Snowfall with total amounts of 15 to 20 cm is expected.

Hazards: Snow, at times heavy, this evening through Friday morning. Total snowfall accumulations of 15 to 20 cm possible.
Near zero visibility at times in heavy snow and blowing snow, mainly tonight will meant icy and slippery surfaces.

When: This evening through Friday morning.

City of Toronto winter crews and equipment are ready for the forecasted freezing rain and snowfall expected to begin this afternoon.
Right now, City crews are monitoring road conditions and actively patrolling roads to clear debris and keep catch basins clear, which prevents surface flooding on roads.
A special weather statement is in effect for Toronto with snow mixed with ice pellets beginning this afternoon and a risk of freezing rain. Snowfall accumulation of 10 to 20 centimetres  is possible by Friday morning.
The City maintains 14,743 lane-km of roads, 6,500 km of sidewalks and 640 km of bike lanes, and has the following staff and equipment that will be working 24/7 in response to the forecasted snowfall:
• More than 1,500 personnel (contracted and City staff)
• 600 snow plows
• 360 sidewalk plows
• 200 salt trucks
Salt trucks will be deployed as soon as the rain changes to freezing rain. Plows will be deployed as soon as snow accumulation reaches 2.5 cm on expressways, five centimetres on major roads and eight centimetres on local roads. Sidewalk and bike lane plows will be deployed at two centimetres of snow accumulation.
Road users should keep a safe distance from snow clearing vehicles, be patient and give City crews room to make our roads and sidewalks safe and accessible.
Where safe to do so, residents are asked to clear catch basins (the square grates on the road) in front of or near their homes of ice, snow and debris to help prevent surface flooding and allow water to drain off the road. Residents who see a significant accumulation of water on roadways are asked to contact 311.
Toronto has a comprehensive snow and ice response plan with operations focused on the safety and movement of residents and emergency vehicles with the salting and plowing of roads, sidewalks and bike lanes. More information is available at www.toronto.ca/snow.