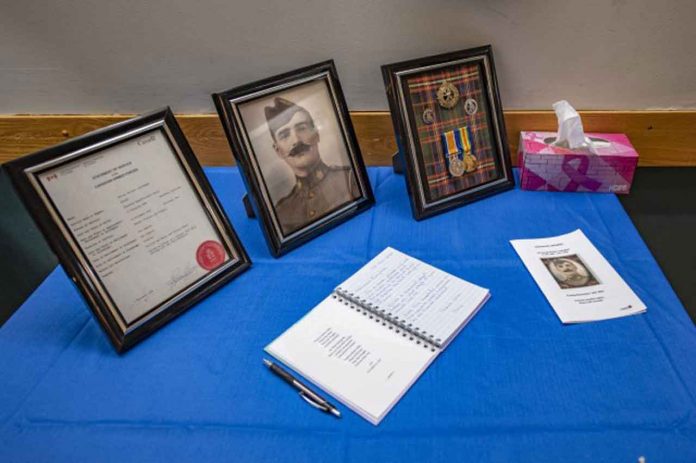 OTTAWA – The Department of National Defence and the Canadian Armed Forces have confirmed the identification of a previously unknown grave as being that of Corporal George Herbert Ledingham, a Canadian soldier of the First World War. He was originally partially identified as an unknown corporal with the 43rd Battalion when he was buried in Canada Cemetery, Tilloy-lez-Cambrai, France.

George Herbert Ledingham was born on February 17, 1887, to Alexander Ledingham and Barbara Elizabeth Ledingham (née Paulin), in Aberdeen, Scotland. He worked as a teamster before enlisting on November 15, 1915, in Winnipeg, where he joined the 179th Battalion. One of his brothers, William Alexander Ledingham, also joined the Canadian Expeditionary Force – specifically, the 17th Battery, Canadian Field Artillery – and survived the war.

Private Ledingham’s unit sailed from Halifax on October 3, 1916. Shortly after his unit arrived in England, the 179th Battalion was absorbed into the 17th Reserve Battalion, which provided reinforcements for the front. As a result of the losses suffered in the preceding weeks, on November 13, 1916, Private Ledingham was posted to the 43rd Canadian Infantry Battalion (Cameron Highlanders of Canada), Canadian Expeditionary Force, in France and served with them until his death. In October 1917 Private Ledingham was awarded the good conduct badge; he was promoted to the rank of lance corporal and then corporal in September of the following year. Corporal Ledingham died on October 1, 1918, during the second phase of operations to secure the bridgeheads at Ramillies and Aire as part of the intense fight to take Cambrai, a major enemy transportation hub in northern France. He was 31 years old.

The Canadian Armed Forces has notified the family of Corporal Ledingham’s identification and is providing them with ongoing support. A headstone rededication ceremony will take place at the earliest opportunity at the Commonwealth War Graves Commission Canada Cemetery in Tilloy-lez-Cambrai, France.