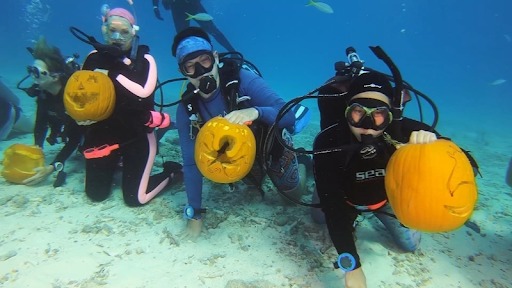 A group of artists dove down in the waters off Miami’s Key Largo to participate in an underwater pumpkin carving contest. The divers submerged beneath the Florida Keys National Marine Sanctuary on Sunday for the annual competition. But while diving is fun for some, there are many hidden risks in the sport which make it a good idea to consider diving insurance.

Using dive knives, as well as other tools, the divers carved out everything from creepy sea creatures, to the traditional spooky pumpkin face. One unforeseen challenge was keeping the pumpkins from floating up to the surface while carving them.

Many of the local fish appreciated the show, however, since every bit of pumpkin that floated up made a tasty halloween snack.

The grand prize winner, Chicago resident Dan Eidsmoe, won first place with his carving of a shark’s grotto, complete with plastic shark and LED strobe light. The funky shark club won the artist a dive trip at Amoray Dive Resort, the organization which sponsored the event.

And while this contest showed the fun possibilities while diving, there are many risks associated with this sport. All of the contestants surely were experienced divers, but those who are less so many do not realize that for people with pre-existing conditions, diving can even be fatal.

Are People with Asthma More At Risk?

One of the greatest perceived risks of scuba diving is trouble breathing, which is a particular problem for people with asthma. However, experts widely agree that as long as asthmatic people have normal lung function, it is ok for them to scuba dive.

Asthma is a chronic condition which affects approximately 25 million Americans, according to the Centers for Disease Control and Prevention (CDC). It involves the inflammation of the lungs which causes airways to swell and close, causing breathing problems.

For this reason, diving organizations and businesses often do not let asthmatic people dive, for fear of a flare up while underwater. These flare ups can happen when the affected person is exposed to allergens, but it may also occur during exercise or when exposed to the cold.

However, every case is different and there is not enough evidence to support that those with less severe cases shouldn’t dive.

When divers ascend, the air inside their lungs expands as a result of pressure changes. This can cause complications in asthmatic people if a bronchospasm were to occur, which results in tightening of the bronchi (airways). Constricted airways may not let the expanded air pass, which could cause a lung rupture and lead to lethal side effects such as a collapsed lung or an air embolism.

Additionally, any type of asthma attack could prevent the diver from ascending or following the correct procedure for exiting the water. This could be due to them not being able to breathe, but also due to the lack of energy to swim out.

Diving is no doubt a popular sport which attracts many who are curious about life teeming underwater. The opportunity to witness flora and fauna in the deepest depths is only possible due to a highly controlled system which divers must learn and master before submerging.

However, before diving it is important to evaluate the state of the diver’s health, since there are some biological processes that take place which could affect those with certain conditions.

Beginners, and even experienced divers, often buy scuba diving travel insurance to have a safeguard in place if anything were to go wrong.

This type of insurance covers medical expenses related to diving accidents, which can often involve transportation to adequate health facilities. While the odds are low for a scuba accident in a supervised and controlled environment, as well as within training limits, there are potentially high costs if something does go wrong.

Diving insurance can cover rehabilitation in a recompression chamber (due to decompression sickness), travel and transportation cost to hospitals, partial or complete disability, and lost or damaged equipment. In the worst case, this can also include repatriation of remains if diving outside of the country of residence.

Notably, many medical insurers exclude diving from their policies as it is deemed “hazardous”. That’s why it’s important to get specific diving insurance that will cover any potential accidents. Some generic insurance policies offer a “sports rider” extra which can cover certain activities, but getting proper coverage is the only way to go for those who want to really dive into the sport.