Regina – BUSINESS – Strong commodity prices combined with low interest rates continue to sustain farmland value increases in most parts of Canada, according to a mid-year review by Farm Credit Canada.

“While the drought across most of Western Canada and the pandemic have captured most of the headlines, strong commodity prices and low interest rates have been quietly supporting a vibrant farmland market for the first six months of 2021,” said J.P. Gervais, FCC’s chief economist. “Higher-than-normal prices for wheat, canola and corn have improved the profitability of many operations in the second half of 2020 and early 2021, putting them in a better position to invest in farmland as the opportunities arise.” 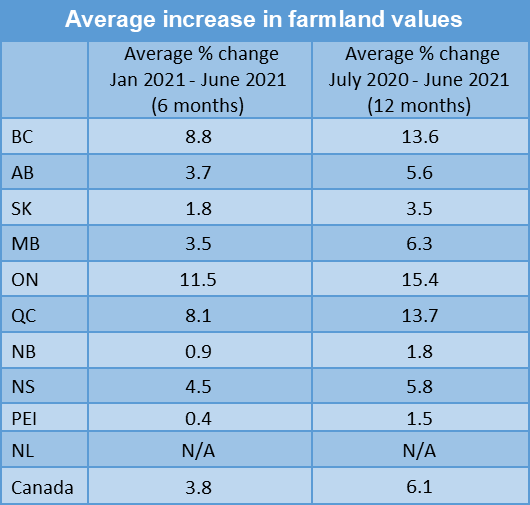 Average farmland values in Canada are once again showing steady increases for the first half of 2021, although the full impact of widespread drought this summer has yet to be weighed.

The average value of Canadian farmland increased by 3.8 per cent for the first half of this year, compared to an average increase of 3.7 per cent for the same time last year. This increase is in line with mid-year results over the past six years, which showed single-digit increases for the full year.

In general, Prairie and Atlantic provinces reported the most modest increases, while Ontario, British Columbia and Quebec had the largest increases.

Buyers from different sectors are competing for the limited amount of land on the market.

Interest rates declined at the outset of the pandemic and remain historically low, which is also supporting the demand for farmland and weakening the supply of available land for sale in the market.

“While many crop producers have benefited from the high commodity prices and have been able to take advantage of low interest rates to buy land, not everyone is in the same boat,” Gervais said. “The outlook for revenues is murkier for 2021 and 2022 given exceptional production challenges in parts of the country.”

Livestock producers, for example, have seen their cost of production increase and profits shrink as a result of the drought.

“The overall economic environment of the next 12 months bears watching. The possibility of higher interest rates, inflationary pressures and the demand for ag commodities could influence the demand for farmland,” Gervais said.

Gervais recommends farm operators continue to exercise caution, especially in regions where the rate of farmland values growth significantly exceeded that of farm income in recent years. He also recommends operators maintain a risk management plan to protect their business from unpredictable circumstances.