Electrical Vertical Take-off and Landing aircraft (eVTOL) are moving from science fiction to reality, enabled by rapid advancements in electric motor, battery, and computing technology, the new report from IDTechEx, “Air Taxis: Electric Vertical Take-Off and Landing Aircraft 2021-2041“, finds. The report explores the potential of eVTOL aircraft to improve journey times between poorly connected locations in a way that is affordable, low emission, and quiet enough to operate within cities.

Today, leading eVTOL aircraft developers like Joby Aviation, Beta Technologies, and Wisk Aero are moving towards flight certification, with the intention to mass produce aircraft at more than 10 times the volume of today’s general aviation aircraft manufacturers. Work is currently being undertaken both to deliver the advanced technologies required and to build the supply chain: a collaborative effort between eVTOL OEMs and their suppliers over the next decade will lay the foundation for future growth.

Over $4 billion has already been invested in the emerging eVTOL aircraft market and recent announcements by eVTOL start-ups Joby Aviation, Archer Aviation, and Lilium, who intend to go public via SPAC merger, are set to raise an additional $3+ billion in capital. Large aerospace suppliers are already committing significant resources to the urban air mobility market. Honeywell and Rolls-Royce are leaders, both having already established specialist units for urban air mobility, to explore technologies including electric and hybrid-electric propulsion systems, avionics, actuation, aircraft structures, and autonomous flight systems.

Perhaps most critical is battery technology. Whilst eVTOL aircraft OEMs are building flight-capable prototype designs with current state-of-the-art battery pack energy densities of around 180 Wh/kg, air taxi range, endurance, and operational flexibility would be massively enhanced by battery improvement to energy densities greater than 400 Wh/kg. It is not viable to put today’s automotive batteries, which have been designed with suitable power characteristics for ground transport, directly into eVTOL. IDTechEx expects high demand on energy density, power, cycle life, and safety will create opportunities and market entry points for emerging battery chemistries, including lithium metal solid-state batteries, which, whilst possibly too expensive for most automotive applications when they launch, may find a more receptive market in aviation which is less sensitive to the premium. 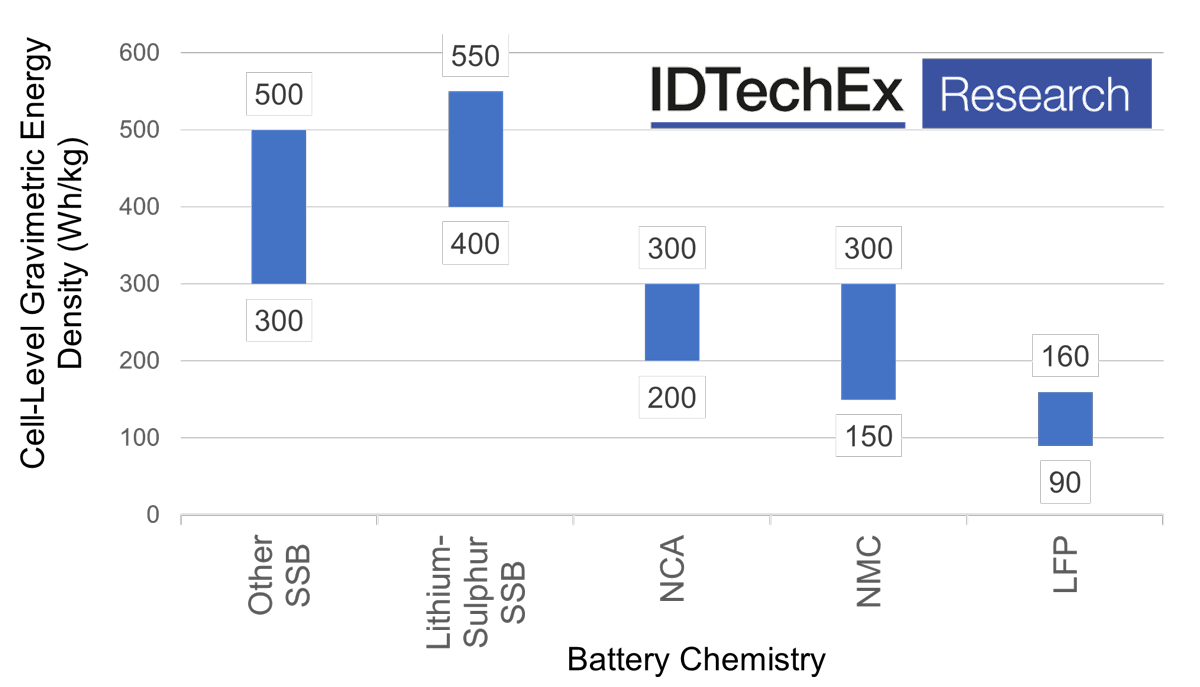 Opportunity charging will also have a significant role to play: eVTOL aircraft will likely have to charge their batteries between each fight mission, but high utilization of the aircraft necessitates quick turnaround times at vertiports, which will limit available charge time. Air taxi infrastructure will therefore need to incorporate ultra-fast charging, with the best designed systems offering a considerable operational advantage.

Whilst OEMs wait for next generation batteries, they are exploring other options such as hybrid or fuel cell-hybrid powertrains, integrating either current aircraft turbine and piston engines or fuel cells systems as generators, to charge the battery in flight, enabling greater range and endurance, whilst still exploiting the benefits of distributed electric propulsion.

The use of fuel cells, which generate electricity using hydrogen, could potentially extend the capability of air taxis whilst maintaining low emissions. Though there are issues to be addressed around the production of green hydrogen (made from renewable sources) and blue hydrogen (made from fossil fuels with carbon capture), fuel cell eVTOL aircraft could be an opportunity for companies and countries investing heavily in developing hydrogen infrastructure.

A further critical element of eVTOL design is the electric motors employed, with eVTOL designs often have six or more motors distributed around the airframe. This is a challenge since electric motors for air taxis need to meet high-power demand during take-off and landing but must be lightweight to avoid hindering aircraft performance. Conventional radial flux motors for ground-based electric vehicles may struggle to achieve the requirements. Motor manufacturers are looking at enhanced designs including developing axial flux motors (‘pancake motors’) for eVTOL aircraft applications, which have power densities 3 to 4 times greater than radial-flux automotive motors (10 – 15 kW/kg, versus < 5kW per kg).

Likewise, reducing the weight of the aircraft frame will be critical to maximizing eVTOL aircraft range and payload. eVTOL architectures will require a variety of different carbon fiber composite materials to be designed and fabricated to optimally meet the aircraft performance requirements. There are a multitude of opportunities in eVTOL aircraft for advanced material manufacturers including the production of primary and secondary structures, rotor blades, and aircraft interiors.

Opportunities are of course not limited to technology within eVTOL aircraft; for example, the infrastructure for air taxi operations needs to be built, from the planning and construction of vertiports, that must efficiently link air taxis with ground-based transport modes through to advanced systems for enhanced flight booking and security check-in. For managing a high volume of aircraft in low-level airspace new software and systems for UAM traffic management will need to be developed and operated. This new industry will need to exploit robotics in smart factories for high volume production and provide the necessary maintenance, servicing, and spare parts to keep eVTOL aircraft operational. Whilst there are many challenges to overcome, there is growing recognition that eVTOL aircraft may become extremely lucrative for companies willing to put in the early groundwork.

To learn more about the technologies and materials opportunity in eVTOL see the brand-new report from IDTechEx “Air Taxis: Electric Vertical Take-Off and Landing Aircraft 2021-2041”. For more information on this report, please visit www.IDTechEx.com/AirTaxi.