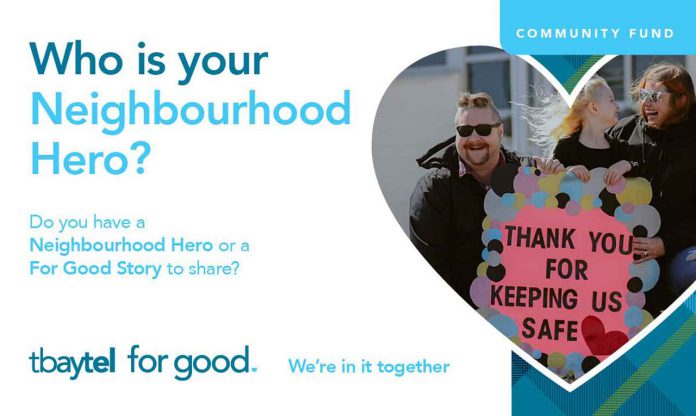 Thunder Bay – BUSINESS – Nationwide voting is now open for Tuned-In Canada: the CCSA Awards and Tbaytel has been shortlisted for an award.

Tbaytel is up against three other nominees in the category of Best story; giving back. The winners in this category are determined by nationwide voting, which is available at www.tunedincanada.com/vote/ until April 1, 2021. Voting takes place using SMS authentication and voters can cast one vote per day for 15 days or deploy all 15 votes at once.

If Tbaytel is the winner, the $1,000 prize for their category will be donated to a local charity of their choice.

“During this unprecedented and uncertain time, the Tbaytel for Good Neighbourhood Heroes campaign kept vulnerable people connected, supported local businesses and shared hundreds of inspiring stories of selfless community members who were giving back,” says Tbaytel President and CEO Dan Topatigh. “As a major employer in northern Ontario, we live and work in the communities we serve. Giving back is an integral part of the culture here at Tbaytel and the Neighbourhood Heroes campaign is just one of many ways that Tbaytel was able to rapidly respond to the needs of these communities.”

In the winter of 2020, Tbaytel saw a need to provide more direct community support and developed the Neighbourhood Heroes campaign.

Tbaytel donated $5,000 to the Regional Food Distribution Association, provided $27,000 in devices, data and voice plans to ensure the most vulnerable community members stayed connected during the pandemic and handed out $20,000 in gift certificates to regional restaurants to support local business in a time of need by having community members nominate Neighbourhood Heroes via social media. This was a wonderful way to celebrate and recognize frontline and essential workers and others who were giving back to their community.

“The CCSA has been running the awards since 2014, and has provided more than $50,000 to winning companies, who in turn have donated their winnings back to the communities where they live and work,” said Jay Thomson, CEO of CCSA. “We hope that everyone in Tbaytel’s serving areas will embrace the community spirit at the heart of this friendly competition and bring out the vote to support their local nominee, Tbaytel.”

The winners will be announced on April 12th.