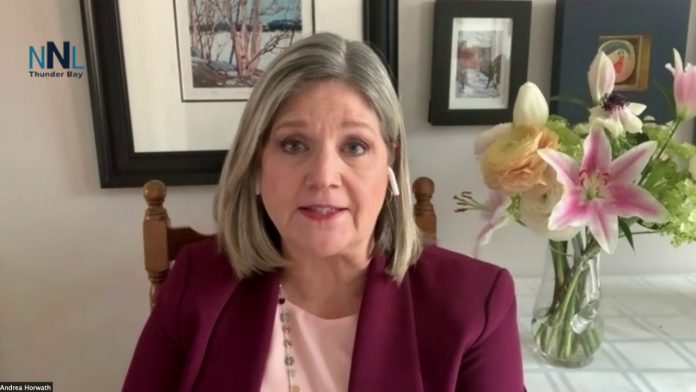 TORONTO — Andrea Horwath and the NDP are laying out the boldest, most effective and achievable climate plan Ontario’s ever had.

In Climate. Jobs. Justice. A Green New Democratic Deal Horwath’s NDP commits to a comprehensive strategy to make Ontario net-zero by 2050, and orchestrate a just transition including the creation of 100,000 permanent jobs from an ambitious building retrofit program, and as many as one million total jobs throughout the life of the deal.

“The climate crisis is the greatest threat our world faces, but it’s also an incredible opportunity. It’s an opportunity not only to go green, but to shift to a more sustainable job-rich and just economy,” said Horwath.

“We’re already paying a price for the climate crisis, and the price our children and grandchildren could pay is unthinkable. No family should have to evacuate again and again because floodwaters keep rising. No one should worry that the air outside isn’t safe enough for kids to go out to play. No one should worry about next generation because of our planet’s uncertain future. With the NDP’s plan, there’s hope.”

The NDP has been consulting on its Green New Democratic Deal discussion paper for more than a year, getting input and ideas from industry, labour, climate scientists, First Nations, educators and everyday Ontarians. Highlights of the plan include:

Horwath said the plan stands in stark contrast to Doug Ford and the Conservatives’ anti-environment crusade. Ford has tried multiple times to carve up the Greenbelt for developers, he gutted conservation authorities, he paid hundreds of millions of dollars to tear down wind farm projects, cancelled Ontario’s cap-and-trade program and even paid to have electric vehicle charging stations removed.

“Our plan is based on values we all share: equity, affordability, and reconciliation. It’s rooted in justice, and committed to a just transition – which promises nobody, and no community, will be left behind. It envisions policies that respect Indigenous knowledge and traditional ecological knowledge, combined with emerging science,” said Horwath. “You deserve a government with a plan to beat the climate crisis. And so does the next generation.”