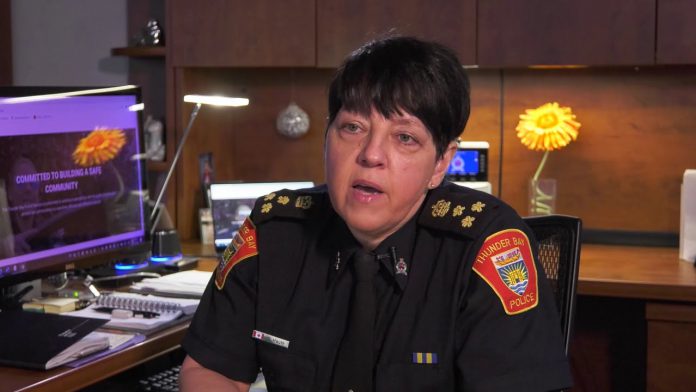 Thunder Bay – NEWS – The Thunder Bay Police Service are moving forward with a new program for the service and for officers. This includes more cameras, not only body worn cameras, but in-car cameras and more interview room cameras. The program also included an upgrade and expansion in the deployment of conducted energy weapons, commonly called in the public, “stun guns”  or “tasers”, which the service says will provide officers with a less lethal option.

The project will also see the introduction of a digital evidence management system that is designed to create a more efficient and effective flow of evidence.

Sylvie Hauth, Chief of Police, says “The Thunder Bay Police Service will be leveraging this new technology to improve public confidence in police interactions. Body worn and in car cameras provide an accurate record which provides accountability and transparency.”

The TBPS will also be upgrading and expanding the deployment of conducted energy weapons which offer a less than lethal option for officers. The TBPS interview rooms will also be upgraded to a new camera system which integrates into the TBPS digital evidence system. All this new technology has been sourced through AXON Canada Inc. The TBPS has opted for AXON’s OPS-7 package to ensure that all the other components in the TBPS project will connect within a dynamic technological ecosystem.

“We’re excited to partner with Thunder Bay Police Service in order to provide greater accountability and transparency in their community,” says Axon’s Managing Director, Canada & Latin America, Vishal Dhir. “Body cameras and TASER energy weapons are a critical component of transparency and keeping communities safer. We believe Axon’s suite of public safety technology can further support the relationship between police and the citizens of Thunder Bay in a number of ways and are looking forward to helping make a positive impact in the community.”

All the digital evidence that the Thunder Bay Police Service deals with will seamlessly enter a secure cloud-based data system. This process will fully integrate to the Province of Ontario’s digital evidence management system which was developed by AXON Canada Inc.

The Thunder Bay Police Service has been developing a plan for the use of body worn cameras following an extensive 6-month pilot project in 2018. The TBPS was able to utilize the outcomes of several procurement processes by other Ontario police services in the selection of AXON Canada.