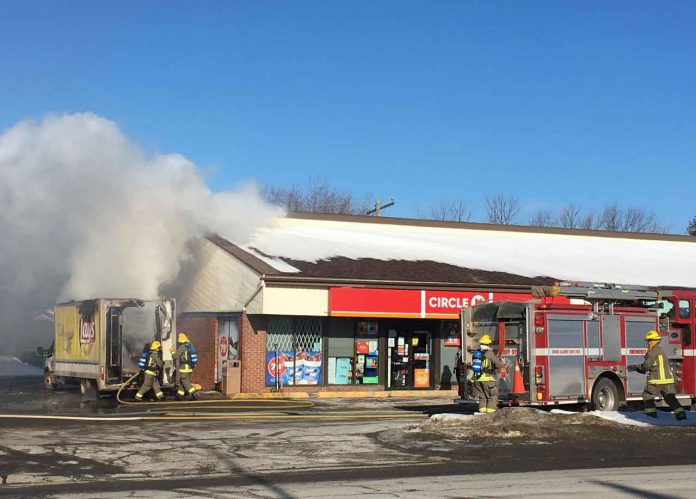 Thunder Bay – NEWS – Thunder Bay Fire & Rescue Platoon Chief John Kaplanis reports that at approximately 10:30 am today fire crews responded to a 911 call for a report of a truck on fire near a building on Edward St. North.

A TBFR Pumper crew was quick to arrive on the scene after responding from nearby Station 4 (James St.). The first fire crew on scene found a cube van full of potato chips, fully involved in fire. The truck was located approximately 2 meters away from the building.

Fire fighters immediately donned self-contained breathing apparatus (SCBA) and stretched a hose line to conduct a quick knock down of the blaze, preventing it from extension to the adjacent strip mall building. The driver of the cube van was inside the commercial building at the time of the fire and was unhurt in the incident.

Damage to the van was extensive. There was no damage to the adjacent structure and fire fighters used Positive Pressure Ventilation to prevent smoke migration into the building.

TBFR crews completed an on scene investigation and concluded that the cause of the fire was due to an unattended portable propane heater located in the cargo area of the cube van where a large quantity of highly flammable potato chips was stored for commercial distribution.

The public is reminded that portable heaters using combustible fuels should be used in well ventilated areas and properly attended when in use. Portable heaters of this type should not be used in close proximity to highly flammable objects. Safe clearances should always be maintained in order to prevent fires caused by radiant heat from portable propane fueled heaters.

There were no civilian or fire fighter injuries as a result of this fire.

A total of 3 Pumpers, and a Command unit responded to the scene.