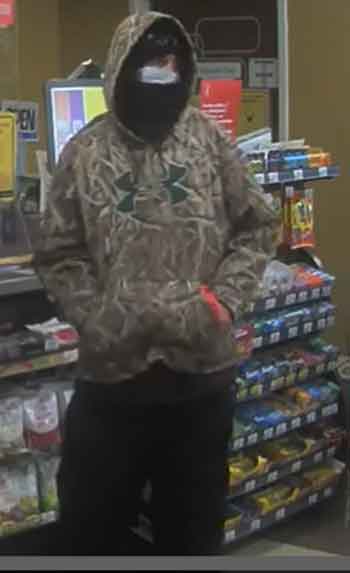 Officers with the TBPS’s Uniform Patrol Branch were dispatched to the Circle K Convenience store at 3 Balsam Street at about 9:10 pm EST on Thursday, February 18, 2021 following reports of a robbery that had just occurred.

The suspect is described as a male standing about 5’10” tall with black hair. He wore a camo hoodie and grey pants at the time of the incident. He was also in possession of a red fabric bag.

Members of the TBPS Break and Enter and Robbery (BEAR) Unit are now involved in this investigation.

As a result of the ongoing investigation, police have obtained surveillance videos showing the suspect at the time of the robbery. Images from these videos are now being distributed to the public in an effort to identify the involved male.

If you have any information that could assist investigators identify this suspect please call police at 684-1200 or Crime Stoppers at 1-800-222-8477, online at www.p3tips.com.

Suspects are considered innocent until proven guilty by a court of law. Lets not have Internet ‘Lynch mobs’ please.

Tiki Madman’s Experts Share Insights on the Future of the Industry in 2022 and...