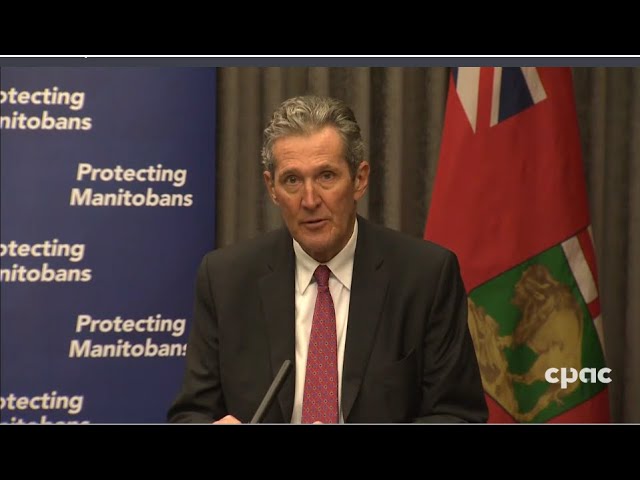 WINNIPEG – OPINION – Manitoba’s premier is like a broken record.

This week, the leader of the province that has the highest proportion of Indigenous residents, demeaned them yet again.

After being asked about Peguis First Nation Chief Glenn Hudson holding “relaxed lockdown” days during the holidays (families will be permitted to visit one household), Brian Pallister called the decision “a massive mistake.”

He said: “COVID does not discriminate, neither should we and we are not going to have two sets of rules around who gets to have Christmas and how it’s celebrated this year because we’re all doing our part to protect one another.”

Pallister, who last week questioned whether First Nations should get priority for vaccines, called this “shortchanging Manitobans” and putting them “at the back of the line,” then added: “We can’t have people going out making up their own rules willy-nilly.”

First Nations generally belong in the first category. When the pandemic began, most First Nations entered lockdown — even when they had no cases — and have had the strongest restrictions in the province for months.

First Nations have implemented curfews, limitations on who can leave the house and when, and even volunteer-run checkstops on roads into communities. Chiefs did this because they knew that when the virus hit, it would hit hard.

Now, after months of keeping cases to a minimum, the on-reserve test positivity rate is 22 per cent — nine per cent higher than Manitoba (off-reserve is 20 per cent, seven per cent higher).

There are emergency situations in Shamattawa First Nation, where the test positivity rate is as high as 80 per cent.

On Thursday, 21 of 24 personal care home residents in Bunibonibee First Nation (Oxford House) were taken to Winnipeg once they had tested positive for the virus.

The military has been called in to help with outbreaks on Opaskwayak Cree Nation, Red Sucker Lake First Nation, Shamattawa — and there are other calls for help in communities like Sapotaweyak Cree Nation.

Forty-four per cent of all new cases of COVID-19 involve First Nations people. Sixty per cent of those are off-reserve, with the majority living in Winnipeg.

Remarkably, Peguis First Nation — the largest First Nation in Manitoba (with 11,000 members, 4,800 on-reserve) — announced Friday it had no active cases of COVID-19 and health officials label the community a “low risk” to spread the virus.

While I do know a few off-reserve cases in Winnipeg, my relatives “up north” (I am a Peguis member) are all safe after going through outbreaks in October.

The community achieved this by instituting drastic measures, including security compliance patrols of homes under quarantine and requiring citizens to register vehicle mileage before leaving the community and verifying it upon return to ensure no extra travel took place.

In other words, Peguis has more than done their part.

The Manitoba government, in the meantime, kept casinos open until Oct. 19, far past the time when the provincial test positivity rate reached the three per cent threshold that suggests community transmission.

The entire province didn’t enter “code red” restrictions and a “partial lockdown” until Nov. 12. And, while travel to northern Manitoba is “restricted,” the province still doesn’t require air passengers from Western Canada — from some of the hardest hit urban centres in the country — to self-isolate.

Manitoba could learn a lot from Peguis on how to handle a pandemic.

The first lesson might be to spend more time protecting your community than wagging the finger at others, especially those doing a lot better than you.

The second might be to learn from the success of Peguis — although I suspect many Manitobans would call their lawyer if a security guard checked to see if they are quarantining or recording their mileage before and after travelling.

The third is to witness how a community safely “opens up” gradually, recognizing the important work they have done while rewarding people by letting them see their families after almost a year of sacrifice.

The final lesson, though, is for the premier.

Pallister, calls for Manitobans to unify, fight the virus together, and words like “we’re all doing our part to protect one another” go mute when you divide, annoy, and pit us against one another.

These also draw dead when the one making up “willy-nilly” rules isn’t First Nations but Manitoba’s government.

Instead, you might want to start with: “Look at what these great Manitobans are doing,” or “What a great job and a model for the province!”

Try saying “thank you.” It might even get you some votes.

You would also stop sounding like a broken record.