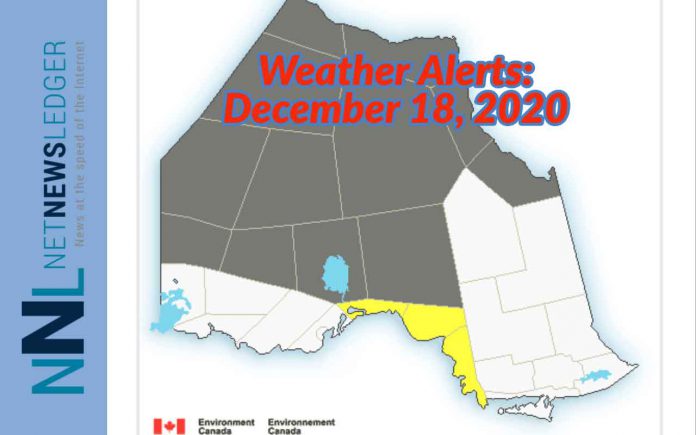 Thunder Bay – WEATHER – All of Northern Ontario is under a Weather Advisory. Western Ontario remains, except for the regions east of Thunder Bay along the north shore of Lake Superior outside the weather alerts.

For the areas to the east of Thunder Bay, snow squalls and a forecast calling for up to 15 centimetres of snow by Saturday morning has generated the alert.

Snow squall watch in effect for:

Snow squalls are expected to develop. Under the snow squall bands, visibilities will be significantly reduced due to the heavy snow, and snow will quickly accumulate.

A cold front moving across northern Ontario today, will bring southerly winds over lake Superior that may generate lake effect snow squalls. These snow squalls are expected to develop late this afternoon or this evening in an area stretching from Marathon east to Wawa and south to Agawa.

Heavy bursts of snow and significantly reduced visibilities at times can be expected late this afternoon and tonight. Travel along Highway 17 during this time may be hazardous.

A total snowfall accumulation of 10 to 15 cm is possible by Saturday morning. Areas closer the lake shore where the temperature is slightly above the freezing mark may accumulate less snow than areas further inland.

For Northern Ontario, Winter Weather Travel Advisories have been issued.

Weather advisory in effect for:

Environment Canada says that a narrow but intense snow squall band, associated with the passage of a cold front, will move across northern Ontario today. This linear snow squall band will extend from Sachigo Lake to Red Lake late this morning and is expected to move eastward throughout the day reaching Webequie and Savant Lake by late afternoon.

A snowfall accumulation of 4 to 8 cm is possible with this snow squall. Strong winds with gusts up to 60 km/h are also possible with the passage of the cold front today. These winds are expected to ease Friday evening.