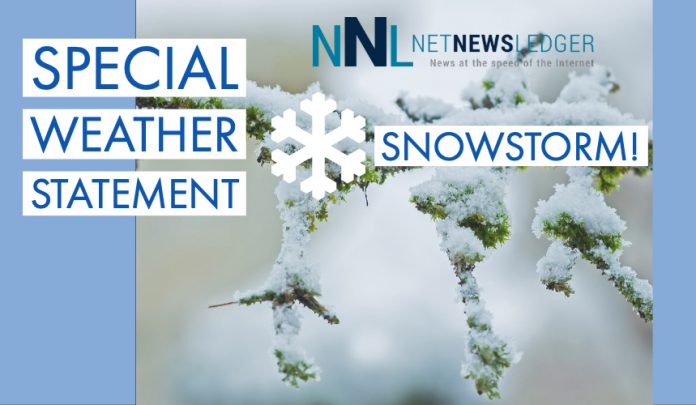 WINNIPEG – WEATHER – Winter appears to be trying hard to make its early arrival across parts of Alberta, Saskatchewan, and into Manitoba as well as parts of Northern Ontario.

Saskatchewan Blizzard Warnings in effect for:

Blizzard conditions with poor visibility in snow and blowing snow are expected or occurring.

Blizzard conditions on Sunday night for portions of southern Saskatchewan.

Moderate to heavy snow associated with a powerful Colorado Low continues tonight over southern Saskatchewan. Snowfall totals as high as 30 to 50 cm are expected by Monday morning. Strong northerly winds, along with with the heavy snow, are producing blizzard conditions across the region.

Conditions will gradually improve from southwest to northeast overnight.

Travel is expected to be hazardous due to reduced visibility. Rapidly accumulating snow will make travel difficult. Visibility will be suddenly reduced to near zero at times in heavy snow and blowing snow. If you must travel, keep others informed of your schedule and destination and carry an emergency kit and mobile phone. Limit outdoor activities. Public Safety Canada encourages everyone to make an emergency plan and get an emergency kit with drinking water, food, medicine, a first-aid kit and a flashlight.

A potent winter storm is bringing heavy snow, wind, and freezing rain to Saskatchewan and Manitoba.

Ice accumulations of 5 to 10 mm are possible in some locations and ice pellet or snow accumulations are also likely before the end of the event.