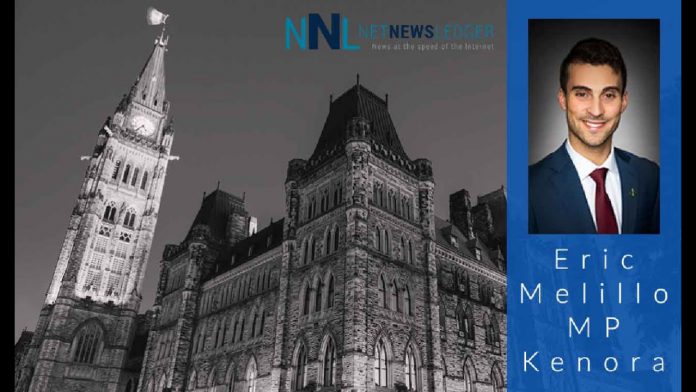 Kenora – Politics – Kenora MP Eric Melillo updates the region on his efforts over the past week.

I spent the last week in Ottawa, fighting for Northern Ontario in the House of Commons.

Early in the week, I spoke up about the lack of healthcare options for residents of many rural, remote, Northern, and Indigenous communities. The government needs to act to ensure all Canadians have access to all healthcare options, including palliative care.

I also stood up in support of a review of the government’s handling of COVID-19, noting that many of my constituents have questions about access to rapid testing and PPE.

Standing up for Investment in Northern Ontario:

During Question Period later in the week, I called out the Liberal government’s decision to give an $800,000 FedNor loan to skritswap, Inc., a tech company that largely operates out of Southern Ontario, with positions in B.C. and California. When I asked Minister Melanie Joly if this company has created a single job in Sault Ste. Marie, she dodged the question.

I find it very concerning that the government spent money meant for Northern Ontario on an organization with very few employees in the region. I can’t help but wonder how many small businesses in the Kenora riding may have been passed over for FedNor loans in favour of less deserving companies who may not even operate here!

Rest assured, I will get to the bottom of this.

I’ve been closely monitoring the situation in Neskantaga First Nation. I’m very concerned about the further deterioration of their water supply, which has caused a partial evacuation of the community. In Question Period on Friday, I once again called on the government to honour their pledge to eliminate all long-term boil-water advisories – Indigenous communities have waited far too long.

I also spoke out on Missing and Murdered Indigenous Women and Girls, asked the government when they will release an action plan to keep Indigenous women and girls safe.

On Monday, I participated in an emergency debate about the Nova Scotia lobster fisheries crisis. Liberal inaction has allowed this dispute to boil over into violence; during the debate, I called on the government to send their Minister of Fisheries, Oceans, and the Canadian Coast Guard to negotiate and find a peaceful resolution.

The latter part of the week was characterized by more political games from the Liberals, who threatened to call an election if either of our Conservative Opposition Day motions passed.

The last thing Canadians need is to be plunged into an unnecessary election – just a year after the last one – during the middle of a pandemic. But we will not be intimidated into stopping our work for Canadians, or shying away from holding the government to account.

Kenora – Three Employees at No Frills Test Positive for COVID-19