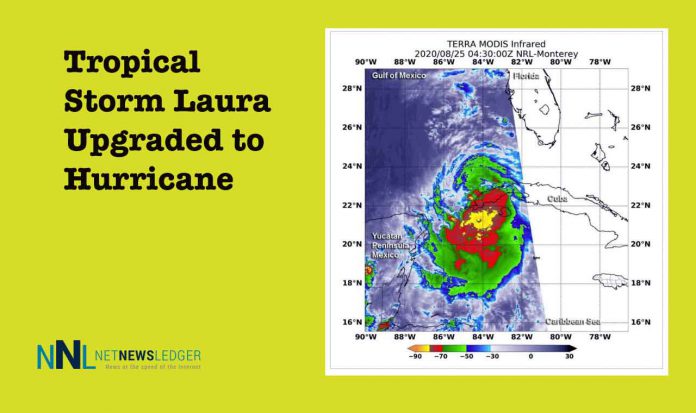 Tropical Storm Laura strengthened to a hurricane in the morning hours of August 25, 2020.

NASA provided infrared imagery that showed the structure, temperature, and rainmaking capabilities of the storm. When NASA’s Terra satellite and NASA-NOAA’s Suomi NPP satellite passed overhead, both provided different images of Laura as it was about to exit the Caribbean Sea and move into the Gulf of Mexico.

Watches and Warnings on Aug. 25

We love you. We’re with you.

The Visible Infrared Imaging Radiometer Suite (VIIRS) instrument aboard Suomi NPP provided a nighttime image of Laura during the early morning hours of Aug. 25. Not yet named a hurricane, the development of an eye was apparent. By 11 a.m. EDT, Laura had a central dense overcast and some outer banding in the southern quadrant.

On July 27 at 4:35 a.m. EDT (0835 UTC), the Moderate Resolution Imaging Spectroradiometer or MODIS instrument that flies aboard NASA’s Aqua satellite used infrared light to analyze the strength of storms within Laura. MODIS found the most powerful thunderstorms were around Laura’s center over the Caribbean Sea, just south of western Cuba, where cloud top temperatures were as cold as minus 80 degrees Fahrenheit (minus 62.2 Celsius). NASA research has found that cloud top temperatures that cold indicate strong storms with the potential to generate heavy rainfall.

Strong storms with cloud top temperatures as cold as minus 70 degrees Fahrenheit (minus 56.6. degrees Celsius) circled the most powerful storms, and were also dropping large amounts of rain.

Laura was moving toward the west-northwest near 16 mph (26 kph), and this general motion should continue today, according to NHC. A turn toward the northwest is forecast by Wednesday, and a northwestward to north-northwestward motion should continue through Wednesday night. Reports from NOAA and Air Force Reserve Hurricane Hunter aircraft indicate that maximum sustained winds are near 75 mph (120 kph) with higher gusts. The estimated minimum central pressure based on the Hurricane Hunter aircraft data is 990 millibars.

Significant strengthening is forecast during the next 36 hours, and Laura is expected to be a major hurricane at landfall. NHC noted the forecast calls for the hurricane to make landfall in the area of southwestern Louisiana or the upper Texas coast late Wednesday night or Thursday morning.

Why Should You Invest in Hunting Land and Ranches in Texas?