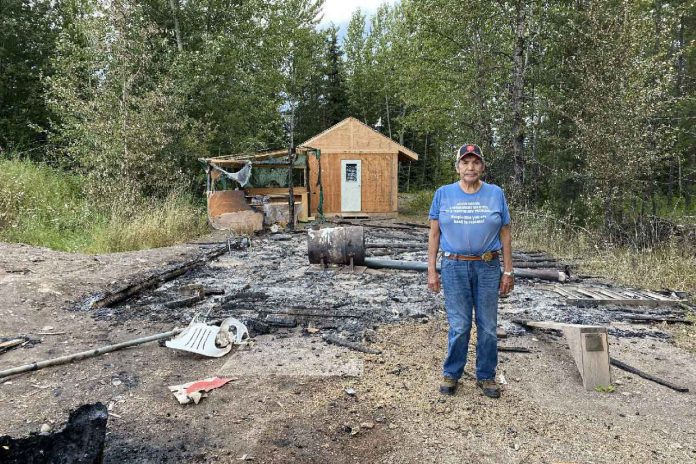 Houston (BC): On Saturday, August 15, 2020, a cabin belonging to Chief Gisday’wa was burned to the ground by unknown arsonists. The arson took place two days after the Houston Today newspaper ran a front-page story which included photographs of Gisday’wa’s cabins, and falsely claimed that his structures had been “left behind” with “no apparent recent use.”

“This just reminds me of the first time that white people came. They kicked our families out of their territory and then they burnt all their huts and everything else and put them on their so-called reserves. This is what this reminds me of,” stated Fred Tom, Chief Gisday’wa of the Gidimt’en Clan.

The cabin burnt down on August 15 served as part of a cultural meeting place, built at the request of the Wet’suwet’en Hereditary Chiefs and used by Gidimt’en clan members.

The cabin site is located at a major intersection on the Morice Forest Service Road and is passed shortly after 5 am each morning by large convoys of Coastal Gaslink contractors and private security vehicles. The road is patrolled multiple times each day and night by RCMP, who continue to occupy a remote police detachment 2.5km past the site of the arson.

RCMP notified Chief Gisday’wa that they were informed of the fire by an anonymous phone call at 9 am. RCMP informed other Gidimt’en clan supporters that they had arrived at the site of the arson at 8:15 am. The site was still smoldering when Chief Gisday’wa arrived to find the taped off crime scene where his cabin had stood.

“It’s absolutely racist. I think it’s white supremacists in the local communities. This isn’t the first time that we’ve been burned off the territory. It’s a well-known fact and a well-known history and experience of Wet’suwet’en people to have been burned out of their homes and out of their cabins off the territory. This happened all throughout the 50s, this has been happening since contact, when the Indian Agents would come in and move people off the territories so that they didn’t have a place to live,” stated Molly Wickham, Sleydo’, spokesperson for the Gidimt’en Checkpoint.

This hate crime is the latest in a long series of arsons undertaken by settlers, industries, and state agents against Wet’suwet’en homesites that have occurred since contact. Dozens of Wet’suwet’en cabins and village sites throughout the 22,000km2 of unceded Wet’suwet’en territory were burned to the ground to make way for Canadian homes and settlements, including Chief Gisday’wa’s childhood home in Smithers, BC which was burnt down in the 1950s.

The Wet’suwet’en will continue to occupy our lands, and to fight against the racist and violent premise advanced in newspapers like Houston Today that Wet’suwet’en homes and lands are abandoned and free for the taking.