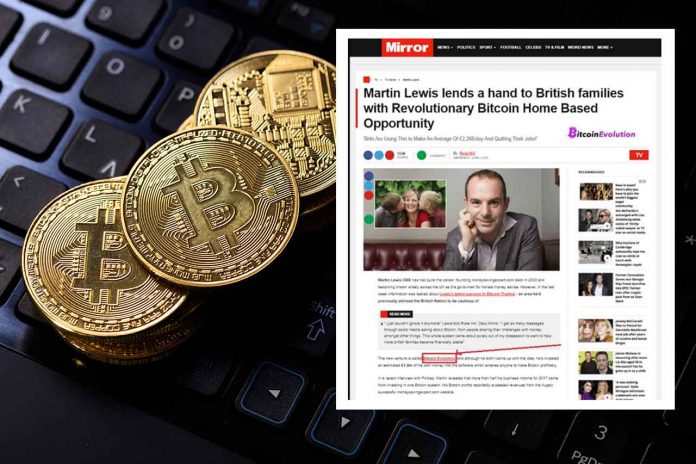 It’s quite apparent that Bitcoin as well as other cryptocurrencies are gaining popularity these days among traditional as well as less educated investors. Part of that popularity has to do with the decentralized nature of this virtual currency, but ease-of-use also plays a critical part. It’s no secret that Bitcoin managed to gain a lot of media attention, which is in many cases associated with new Bitcoin Millionaires such as the Winklevoss Twins and Erik Finman the teenage self-made millionaire.

Scammers are very much aware of this trend and have been using this media hype to promote their schemes. It has come to our attention that in one of these occasions UK celebrity and Journalist Martin Lewis was used to promote a get-rich-quick scheme named Bitcoin Evolution. According to various research websites, Bitcoin Evolution is a part of an illegal network of websites that are used as a turnkey solution for various affiliate networks and unethical media agencies who are actively promoting crypto-scams.

How Does The Scam Work?
Online promoters use various advertising platforms such as Facebook or Google in order to attract new customers. In most cases, viewers will be redirected to an intermediate site after clicking a text link or image. This website is actually a fake (spoofed) news website which looks very genuine, and inside viewers read about how a certain celebrity or high-profile individual has managed to turn a profit using a “wealth loophole” or something along those lines. If they believe it (and many people do) they are directed to the actual website, which is “Bitcoin Evolution” in this specific case.

There Is No Software!
In many cases victims signing up for an automated trading app or some kind of signals software find themselves registering directly to an offshore CFD (contract for difference) broker. These brokers are actually the clients, and they are paying the affiliate network referral commissions for sending paying clients. These affiliate commissions are extremely attractive, especially during times of crisis or social upheaval like we are experiencing these days when financial security is virtually non-existent.

No End In Sight!
This trend will not abate any time soon. In fact, just in the UK financial fraud figures stand at around £190 billion in losses every year according to the Fraud National Crime Agency. That means financial fraud is constantly on the rise and it’s up to each and every one of us to remain vigilant and aware of the constantly changing environment on the world wide web.

How To Avoid The Scam?
If you are unsure or something doesn’t quite add up when you look at the hard facts, try to do a basic Google check as we did. Alternatively, ask a friend or relative! In most cases, this simple process will help you save money, time, and most importantly your self-respect.