Home Covid-19 National Covid-19 Matawa Chiefs – “Our history hasn’t changed much since the days of... 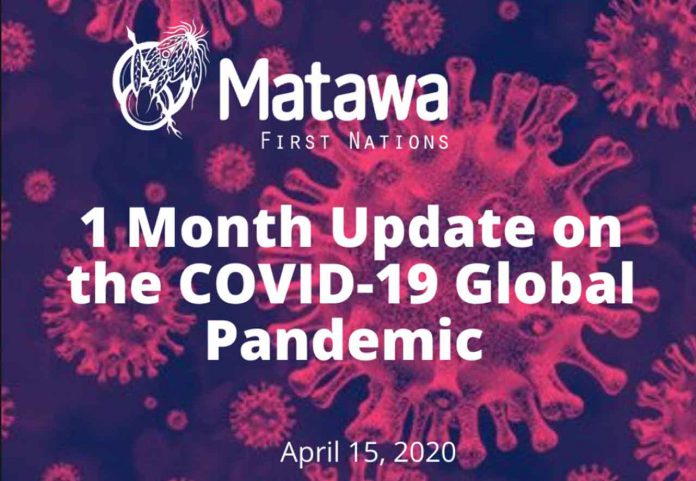 THUNDER BAY – One month into the first wave of the COVID-19 global pandemic, the nine (9) Matawa First Nations are struggling to respond as they are forced to implement quickly developed pandemic plans with limited public health and other human resource capacities in their communities. To date, they have experienced one death (a Constance Lake First Nation off-reserve member on April 3, 2020) and one positive case (confirmed in the remote community of Eabametoong First Nation on April 5, 2020).

“Our history hasn’t changed much since the days of smallpox, polio and tuberculosis—these vaccines were barely given to our Peoples then. We need to be part of the future of Canada and discontinue being seen as ‘non-essential’ moving forward. Today, we are struggling to respond effectively to the pandemic. If governments aren’t able to change the way they have been partnering with us, we fear this will not get better, but worse. The economic position that we have been placed in, as an effect of colonization, is making it challenging for us to respond. We question why there was never enough money for boil water advisories to be lifted but that over $82 billion can appear almost instantly to support Canadians in this pandemic. We also question, where are the partners who want to extract billions in resources from our territory now? We thank our members for their cooperation in the measures we have put in place in our communities and we will continue to do whatever we can to meet the challenges before us so that we can continue to be a strong Peoples into the next 7 generations on our homelands.”

As they work to try to implement their pandemic plans, they are facing many barriers beyond their control such as:

They are beginning to see the need to put plans in place to support the ongoing wellbeing of staff and volunteers supporting the COVID-19 responses in their communities who, they fear, will likely burn-out before the first wave of the pandemic is completed potentially this summer.

With recent comments from Prime Minister Trudeau on April 9, 2020, regarding the need to remain vigilant for at least a year and not being able to return to normalcy until a vaccine is developed—Matawa First Nations have grown more worried.

While government economic response plans have been provided—Matawa First Nations have indicated that they are not nearly enough to cover unplanned and unexpected costs. For example, the federal government’s pledge of $305 million in pandemic assistance for all Indigenous communities is less than 1% of the $82 billion in funding assistance for Canadians. Broken down by province—First Nations in Ontario are to share $37,581,000 million which was formula-based and didn’t consider the unique costs that are also higher due to remoteness in most cases. As another example, the $37 million from the Ontario government gets divided at least 126+ times and is for purposes similar to the federal government rather than new innovative approaches developed with First Nations.

These economic response plans do not generally consider variables experienced by Matawa First Nations such as lack of basic infrastructure like hospitals and health care personnel, remoteness, high cost of living, and transportation—to name a few.The Matawa First Nations say they are in situations which requires high costs and, that, without proper revenue sources and funding mechanisms—they won’t have the means to support pandemic plans which, in the end, can be very detrimental to the population. They say that the funding envelopes come with bureaucratic hurdles needing to be jumped. For federal funding that was first made available, they are reporting being overwhelmed navigating through reimbursement of costs-to-date, specificallycosts incurred prior to March 31, 2020. Many are reporting these costs being denied. They say that this has potential for financial ruin and/or insolvency.

Also exacerbating the issue of new COVID-19 preparedness funding, is the financial status of some First Nations who are reporting that they are challenged on being able to function and execute COVID-19 funding criteria. Especially in the remote north, where costs are higher and lack of services are available, some First Nations have crisis costs from previous years which has never been addressed and, which now are merged with new economic response plan funding.

Limitations on their ability to effectively respond to the pandemic, they say, stem from: