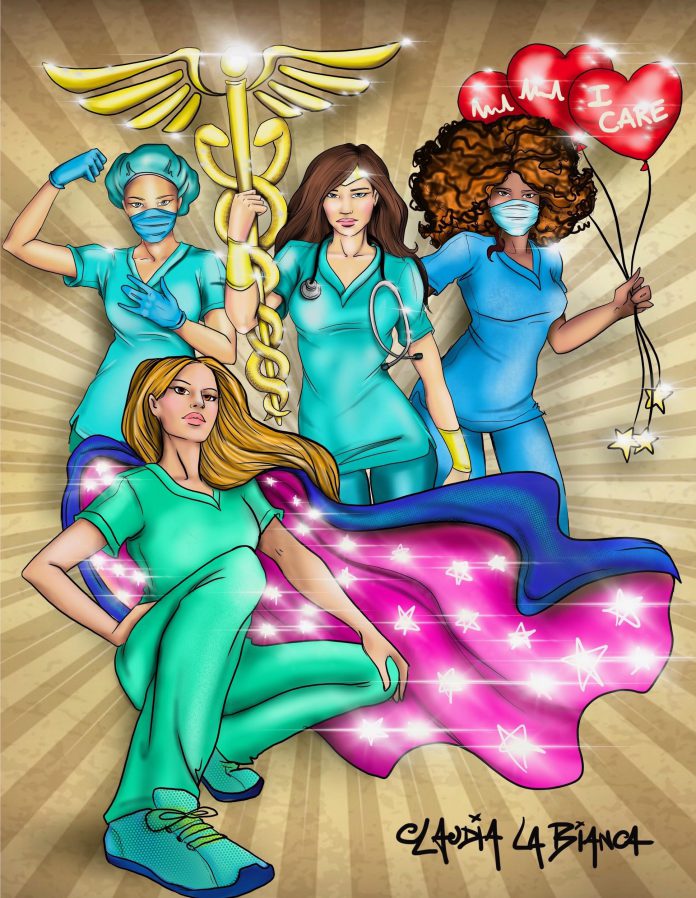 Regardless of one’s political ideology or affiliation, it is safe to say that the current political climate in the United States of America is arduous. Social division, dispute, and hatred are commonplace between individuals in the contemporary political and social atmospheres. Differences in socio-cultural identity, including race, religion, sexuality, etc., has resulted in a dichotomy among Americans. Those very differences that initially sparked and united this magnificent country, now are isolating and denigrating communities of nonconforming individuals. In the wake of this socio-political turmoil, one creator, Claudia La Bianca, remains steadfast in growing her message of unity and love.

Born and raised in Sicily, Italy, La Bianca was the youngest in her family. La Bianca was “born with a pencil in her hand” and immediately took to artistry and composition. Throughout her adolescence, La Bianca experimented with all forms and mediums of art. She bounced around from small and large scale murals, sculpting, and film, experiencing a multitude of success at every stage. Nevertheless, La Bianca continued to meander the artistic realm seeking her true calling.

Now a 41-year-old creator, La Bianca has settled finding her inner calling as a muralist in the Wynwood section of Miami. La Bianca encountered very modest beginnings as a contemporary American muralist, selling compositions for $100 apiece. La Bianca, however, was not disheartened, she expressed, “I figured if I could plant a mural in every corner of Wynwood like seeds, soon I’d have a forest.” From there, La Bianca’s career saw exponential growth and her resume consisted of masterpieces along walls in New York, Philadelphia, and Los Angeles, each worth thousands of dollars.

La Bianca takes inspiration from expressionist Renato Guttuso, and cartoonist Guido Crepax yet provides her own twists and aspects to supply her own flair. She primarily composes murals promoting feminism and radiant love. La Bianca hopes that her art pieces inspire the next generation of women to break the current social mold for women and establish a new status quo. “I want to inspire women to stand on their own, to be strong,” she says. “It’s a reminder to me and all the women around the globe that we are incredible creatures; we are the cradle of creative energy.”

In her most recent collection of work titled “United in Love,” La Bianca revealed a piece of art depicting former First Lady Michelle Obama and current First Lady Melanie Trump posing nude with an American flag waving in the background. The masterpiece, as La Bianca detailed, advances the perspective of viewing people, even famous public figures, as relatable human beings, not distant individuals. As for the nudity, La Bianca harps on using nudity to display natural beauty. She says, “I hope my art sends women the message of independence, confidence, and self-belief.”

Currently, La Bianca is undertaking her most impactful endeavor, partnering with local hospitals to provide support and hope for the health officials dealing with the COVID-19 pandemic. La Bianca’s admiration for these female health professionals is immeasurable, she says, “I am in awe of their bravery and courage. They are endangering their lives to protect others”. La Bianca composed and dedicated a mural titled “Our Heroes” depicting women health professionals. She hopes that design will motivate others to offer material and emotional support for these healthcare officials — the real heroes of the pandemic.