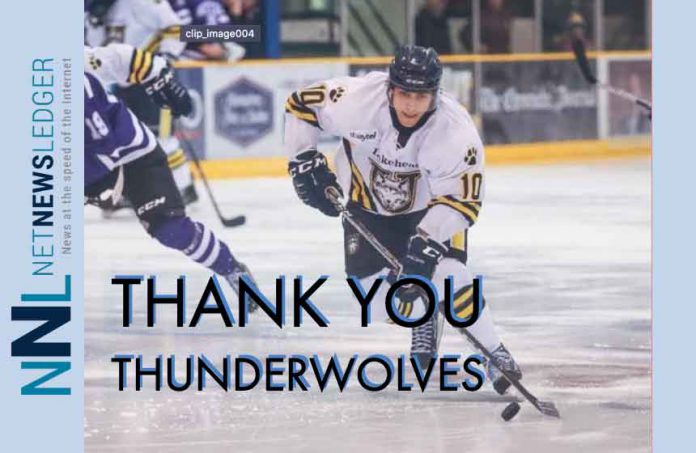 Despite a spirited effort, the Lakehead Thunderwolves fell 2-1 in overtime to the Ryerson Rams at the Mattamy Centre in Toronto on Saturday night and were eliminated from the playoffs in two straight games in the OUA West Division quarter-finals.

There wasn’t a great deal of offense generated in the opening 20 minutes with both teams playing it close to the vest, but the goaltenders – Brock Aiken for Lakehead and Garrett Forrest for Ryerson – were up to the task when called upon.

Ryerson got the only goal of the second period just 17 seconds into it when Steven Harland beat Aiken low on the glove side with a hard wrister from the slot.

Aiken continued his strong play in the middle frame, but for the most part, the Wolves and Rams played smart hockey and limited the other side’s scoring chances.

The pace of play picked up considerably in the third period with plenty of end-to-end action.  Aiken shut down Rams’ sniper Matthew Santos on a semi-breakaway early in the stanza, and Lakehead’s Tomas Soustal was stoned by Forrest twice while the Wolves were short-handed.

Lakehead tied the game up when Jordan Larson tipped Taylor Egan’s point shot past Forrest with 4:32 showing on the clock.

After Lakehead was assessed a penalty for too many men on the ice with nine seconds left in regulation, Ryerson began overtime on the power play but Aiken made three huge saves early on to keep the Wolves in the game.

After both teams traded a few good scoring chances, Ryerson’s Devon Paliani pounced on a rebound and fired the puck high into the twine to end the game at 10:48 of the first overtime period.

Total shots on goal in the game were 41-31 in favor of the Rams.

For the night, Lakehead was 0-for-3 on the power play, while Ryerson went 0-for-4.