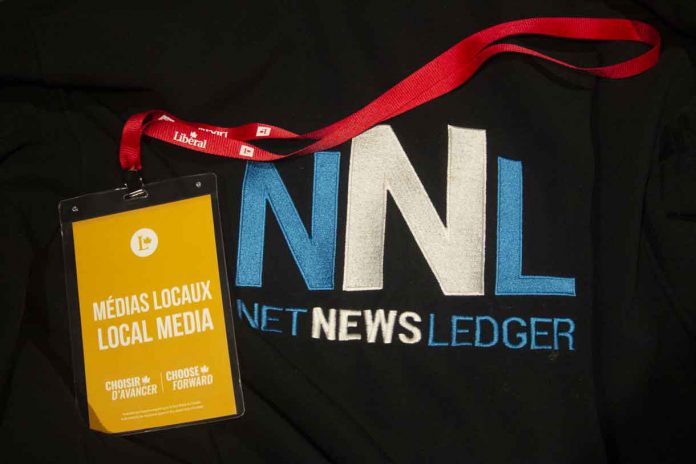 OTTAWA – The Canadian Association of Journalists (CAJ) continues to receive reports that RCMP officers are blocking media from bearing witness to police actions as they implement an injunction and arrest Wet’suwet’en people.

“All week the RCMP have been unnecessarily threatening reporters who are simply trying to perform their democratic duties,” said CAJ president Karyn Pugliese.

“Yesterday the RCMP promised to respect media rights, but today they continue to abuse their powers and blatantly disregard the law in a way that is previously unheard of in Canada and unthinkable in a democratic country.”

The CAJ is requesting that reporters in the area continue to document police interference and misuses of power, including noting names and badge numbers and to continue to share the information with the CAJ.

Filmmaker Michael Toledano tweeted: “Today the RCMP are bullying journalists to repress images in real-time. As RCMP approach #Unistoten, media here are resolved to do our job and witness police action.”

Jerome Turner, who is covering the dispute for Ricochet media, described to his editor, Ethan Cox, how he had been detained, prevented from bearing witness to events, and filing reports multiple times by the RCMP during the past 24 hours.

“The [RCMP] weren’t going to let me go in the direction of the story,” Turner told Cox.

The tension between journalists covering those in the Wet’suwet’en Nation opposing the Coastal GasLink project and the RCMP have been escalating since Dec. 31, when the B.C. Supreme Court granted Coastal GasLink an expanded injunction.

Late Thursday night RCMP Cpl. Chris Manseau emailed Cox a statement that said: “The Royal Canadian Mounted Police respects the fundamental freedom of the press under the Canadian Charter of Rights and Freedoms, as detailed in recent decisions by Courts across Canada. Journalists can rest assured that the RCMP will make every reasonable effort to allow media personnel to get as close as possible to the enforcement area while ensuring no interference with police operations.”

However, that response came only after several media organizations, including the Narwhal, Ricochet, the CAJ and others, publicly called out the RCMP setting off a wave of public pushback, for the RCMP’s repeated interference with media.

Senior Media Relations Officer, Communication Services, Janelle Shoihet,  had emailed Cox earlier that day, telling him explicitly they planned to arrest Turner reporter if he did not leave voluntarily.

On Thursday, RCMP officers also spoke openly on camera about arresting Vice freelancer Jesse Winter. The video clearly shows Winter is on the sidelines of the action and not interfering with officers. After the threats, to Winter and the camera operator, Bunker Seyfert of Mutual Aid Media were detained by RCMP, put in a police car and driven more than 20 kilometers to a parking lot in the town of Houston.

Reports by Toledano, Seyfert, and others, confirmed that the RCMP were interfering with reporters in ways that violate constitutional law and court decisions upholding media rights and free expression, such as blocking reporter’s cameras, or threatening to arrest journalists if they photographed weapons or certain arrests.

In a statement released yesterday, Amnesty International blasted the RCMP for a “crackdown” they said “threatens free press” and called for an investigation into “why these unjustified and potentially unlawful threats were made in the first place and ensure that clear orders and proper training are in place to align policing operations with human rights obligations.”

“The CAJ has been in touch with editors, publishers, and journalists on the ground. We are documenting everything,” said Pugliese.

A 2019 landmark court decision, passed down by the Newfoundland and Labrador Courts of Appeals, reaffirmed that special considerations apply to journalists covering a protest even when an injunction order has been issued.

Commonly known as the Justin Brake case, the decision allowed for special considerations for persons who are engaged in good faith journalistic coverage in the public interest; is not actively assisting the protesters, and are not interfering with law enforcement.

In that case, Justice Derek Green also noted the importance of the media in advancing reconciliation and understanding of Indigenous peoples and issues stating that “particular consideration should be given to protests involving Aboriginal issues.”

The Canadian Association of Journalists is a professional organization with more than 700 members across Canada. The CAJ’s primary roles are public-interest advocacy work and professional development for its members.

When Do Police Services Report to the Public and the Media?