Poker is a game with so much drama, thrills, and entertainment that it lends itself perfectly to the silver screen. If it’s good enough for James Bond then surely some of the glamour that is attached to international espionage will rub off when we head to the tables.

Over the years, a number of films and TV shows have used poker as either a central theme or a useful aside to the main story. There’s even a top ten of poker films on the respected IMDB website but which of these is your personal favorite?

The world of online poker may be gaining an increasing foothold in terms of overall revenue but the game clearly retains a place in the physical world. Bricks and Mortar casinos continue to thrive and have responded well to the challenge of online play.

It’s also debatable as to whether an online card game could form the basis of a great movie plotline and film lovers must, therefore, hope that real-world poker continues to thrive. As far as those poker films are concerned, the 1998 release of Rounders has made it to the top of the charts but for many, this is a curious selection. 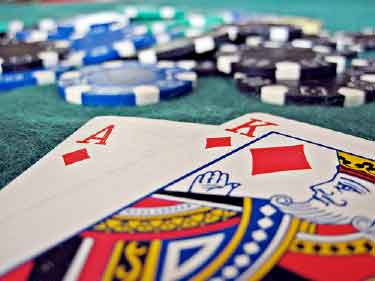 Rounders is known primarily as an early Matt Damon film and one that went under the radar on its release. It tells the tale of two friends who take to the poker tables in an attempt to pay off a huge personal debt. In time, it’s become a cult classic but unless you’re a poker fan, you may not have even heard of it.

If we go back to James Bond, we find that 007 might just prefer a few rounds of Baccarat but he’s been involved in the occasional poker classic. As Daniel Craig made his bow in the 2006 version of Casino Royale, Bond takes on an assortment of high stakes villains and even overcomes an attempted poisoning as he eventually comes through to scoop the pot.

They have a growing number of rivals in the present day but for many TV viewers, their favorite cartoon family will always be The Simpsons. Homer has been getting into various scrapes for over three decades now and he’s no stranger to the poker table himself.

After revealing himself as the ‘Chosen One’ by the Stonecutters in the Episode known as Homer the Great, our hero finds himself in a no-lose situation – even winning one poker round with a useless hand which Moe dubs as the Royal Sampler.

His exploits on the baize aren’t quite so successful in the series 5 episode Secrets of a Successful Marriage when Homer is accused of being ‘slow’ at the card table.

Poker has revealed itself in many other TV programs including Friends and Tilt while Lady Gaga is, perhaps, the most famous contributor from a musical point of view. While it remains as one of the most popular card games both online and in the physical realm, poker will continue to attract this huge interest from the world of popular culture.

Which are the Largest Casino Companies in the UK?