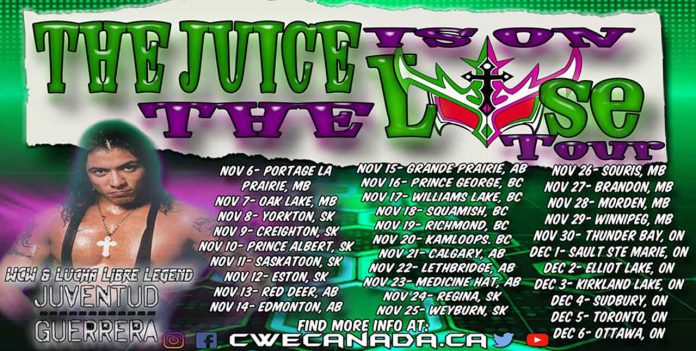 WINNIPEG – SPORTS – Professional wrestling is at the forefront of pulp culture again and reaching new heights of popularity that are arguably the biggest the industry has ever seen with multiple global wrestling sized organizations on national and worldwide television and with brand new programming accessible on television EVERY day of the week.
With the above-mentioned companies being US-based, Canada in the meantime has been in the background developing its own homegrown brand of professional wrestling and developing Canadian talent in a way never done before and Canadian Wrestling’s Elite continues to up the ante starting this Wednesday, November 6th through December 6th in what will be the largest traveled Canadian wrestling tour in the history of the country!
31 cities & towns in 31 days across 5 Canadian provinces from Vancouver to Ottawa and almost everywhere in between will see history made when Canadian Wrestling’s Elite produces the most rigorous travel schedule and wrestling tour ever done in Canada with elite Canadian talent from around the world wrestling each and every night!
The tour coined “The Juice Is On The Loose Tour” is headlined by WCW & Lucha Libre Cruiserweight Legend Juventud Guerrera from Mexico who is headlining and competing on his first-ever Canadian wrestling tour.
Juventud Guerrera was a trailblazing and trendsetting athlete that helped bring the Mexican Lucha libre style to a North American audience with displays of athletics in matches against fellow legends Eddie Guerrero and Rey Mysterio that were never witnessed before on a global stage. This innovative and death-defying style of pro wrestling helped World Championship Wrestling become the only company in wrestling history to edge out Vince McMahon and the World Wrestling Federation and for 83 weeks over during the famed “Monday Night Wars” of the 90s.
Juventud Guerrera is trading in his swim shorts and tank top he wears daily in Mexico for his first-ever parka winter jacket as he experiences Canadian wrestling, Canadian culture, and most challenging, the Canadian winter for the first time.
The previous spring tour celebrating the 10th Anniversary of CWE saw barriers broken with the company hosting its first live events ever in the Vancouver and Toronto area.
More lines will be crossed when CWE hosts its first-ever events in Oak Lake, MB, Eston, SK, Williams Lake, BC,  Squamish, BC, Kamloops, BC, Elliot Lake, ON and the country’s capital of Ottawa, ON to finish off the tour.
The tour hosts dozens of top international stars throughout the tour including IMPACT! Wrestling TV Star & former WWE Creative Writer “The Zombie Princess” Jimmy Jacobs, Ring Of Honor TV Stars “The Horror King” Vinny Marseglia, “Wildhorse” TK O’Ryan, & “Number 1” Brian Johnson, as well as the first-ever women’s wrestling match featured on an entire Canadian wrestling tour.
CWE continues to build new fans by the day as it becomes the brand associated with Canadian wrestling to fans of this country and around the world and what is being labeled by fans across the country as the most talent deep tour produced in the company’s near 11 year history it will only continue to grow with The Juice being let loose across Canada!

CWE’s Juice Is On The Loose Tour schedule is as follows: