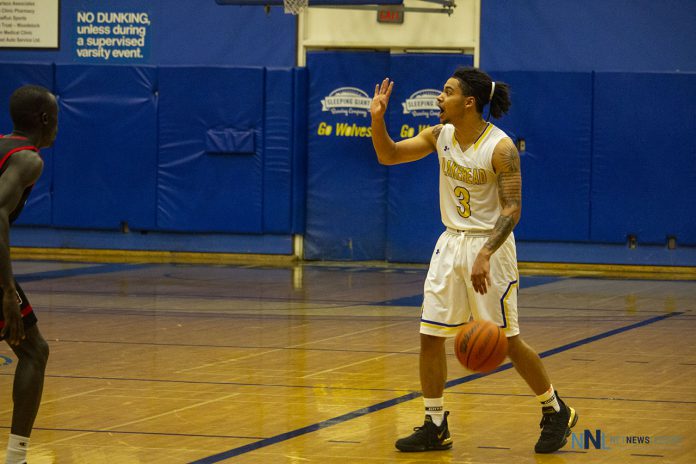 THUNDER BAY – Sports – The game opened with the Winnipeg Wesman opening a large lead with field goals. Pin-point shooting from outside gave the visitors a 20-8 early lead. The Thunderwolves men’s basketball team battled back to bring the game back into balance with a strong first half.

However it wasn’t enough, the team fell back in the second half to lose the opening game of the pre-season by a score of 88-63.

“It was a tough first one but a good learning experience,” said Head Coach Ryan Thomson.
“The guys are looking to bounce back tomorrow.”

Thunderwolves forward Eric Gonzalez had a great first game with the Thunderwolves, scoring 11 points.. Thunderwolves sophomore Alston Harris would lead the Wolves in scoring with 12 points. On the defensive side, Laoui Msambya would lead the team with 8 rebounds.
Winnipeg’s Narcisse Ambanza and Adam Benrabah would both score 20 points to lead the Wesmen. Benrabah also led the Wesmen defensively with 11 rebounds.
There was a lot of intensity from the ‘Wolves Thursday night. As the Wesman continued to mount up their winning scores. That intensity kept almost the entire crowd in the game right to the end.
The Thunderwolves will be looking to bounce back on Friday, October 4th with a 12:00 Noon rematch against the Wesmen at the C.J. Sanders Fieldhouse.
(with files from Lakehead Thunderwolves)