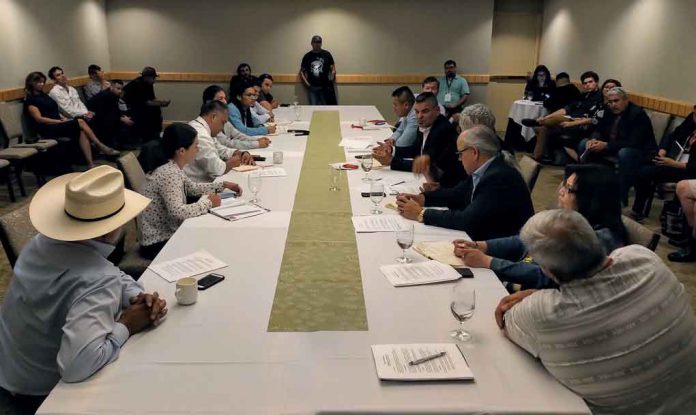 VANCOUVER – The work underway on the First Nation Federal Framework on Cannabis was discussed at the inaugural meeting of the AFN Chiefs Committee on Cannabis during the AFN National Cannabis Summit, held September 4-5 in Vancouver. Committee members agreed that the framework is critical in order to harmonize the First Nation “seed to sale” cannabis industry with the rest of Canada.

The committee was formed as a result of the resolution moved by Chief Edward Boulrice of Thessalon First Nation at this July’s AFN Annual General Assembly. Thessalon is currently operating a cannabis production facility with a goal towards inclusion in the mainstream national supply chain.

The committee is chaired by BC Regional Chief Terry Teegee, and co-chaired by Councillor Larry Sault of the Mississaugas of New Credit. Other members include Onekanew Christian Sinclair of Opaskwayak Cree Nation (OCN), who seconded the national AFN resolution. OCN is a part-owner of National Access Cannabis, and has invested in 50 cannabis dispensaries in California.

Isadore Day, CEO of Bimaadzwin, told the committee that many First Nation communities are moving forward on their own, demonstrating that their laws, their policies and their regulations are sufficient for their community-level enterprise objectives. However, Canada and the provinces must be reassured that the expanding First Nation cannabis industry meets all regulations and safety standards.

Besides harmonization with the rest of Canada, First Nation communities currently involved or considering the cannabis industry must address current challenges and meet future requirements, such as:

In the coming weeks, a first draft of the framework will be developed and presented to federal government officials. Besides First Nation leaders and entrepreneurs, federally recognized First Nation organizations are involved in the drafting and approval process, while the AFN is providing political support.