THUNDER BAY – New Democrat Leader Andrea Horwath was in Thunder Bay on Friday. Horwath has just completed a tour of Northern communities across the region including Attawapiskat where the community has declared a state of emergency over the water.

The New Democrats in a media release issued today say, “Following a meeting with Unifor Local 1075 and Bombardier workers, Official Opposition Leader Andrea Horwath said the lack of orders for transit cars won’t be solved by the governments in Ottawa and Ontario arguing about who’s to blame. The NDP Leader is calling on both levels of government to get moving on building transit now — the only thing that could possibly save the 550 good jobs on the chopping block at Bombardier in Thunder Bay.”

“Instead of building Thunder Bay’s economy and supporting quality jobs, Doug Ford decided to rip up existing transit plans and put jobs on the line,” said Horwath. “But rather than push to get transit built and help fix the problem, the federal Liberal government is wasting time playing a political blame game.

“Both Doug Ford and Justin Trudeau are ignoring the fact that there are real people relying on these jobs. They need to feed themselves and their families. They need to pay the mortgage. They’ve been left to lay awake at night wondering how they’re going to recover from this loss, and they don’t see any help coming their way.”

Horwath said Ford could immediately ensure bi-level Metrolinx trains are tendered, and could ensure the TTC is in a position to move forward on tendering transit cars.

“In our conversations with workers, it was very clear we never should have gotten here,” Horwath added. “Workers have been ringing the alarm bells about this situation for quite some time. They are tired of the finger-pointing. They want the government to listen, step up and take action.” 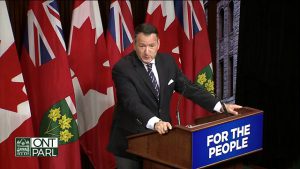 A spokesperson for Minister Greg Rickford says “We are aware that Attawapiskat First Nation declared a state of emergency due to water quality issues in the community and our Provincial Emergency Operations Centre is coordinating the response to the emergency declaration. The Ontario Ministry of Environment, Conservation and Parks is providing in-kind technical support to First Nation communities to promote access to safe, sustainable drinking water and to build capacity and awareness of safe municipal water system operations.
“Ontario is committed to working in partnership with First Nations communities to resolve this issue, and we are calling on the federal government to fulfill their responsibility of ensuring safe water on reserves. The federal government must ensure that adequate funding is provided to improve the quality of water on reserves and that water system operation, maintenance and training are supported.”