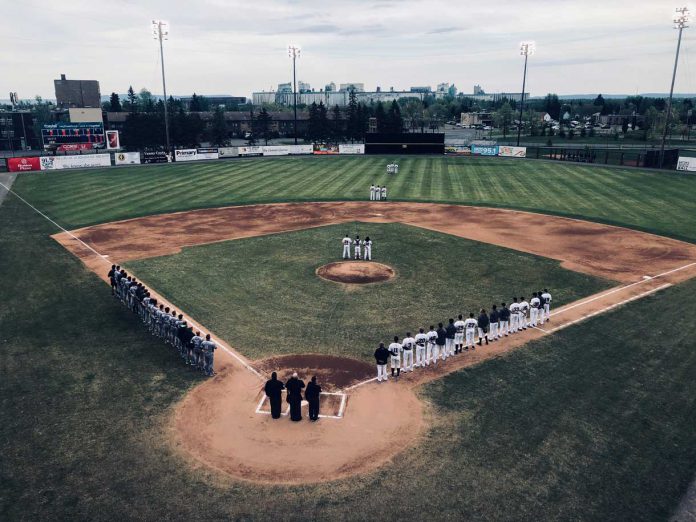 THUNDER BAY – SPORTS – The Thunder Bay Border Cats took on the La Crosse Loggers at Port Arthur Stadium Tuesday night. Coming off a tough road trip, where the Cats lost to the Moondogs and the Eau Claire Express for an 0-4 road trip, the team has returned to the friendly confines of Port Arthur Stadium.

Starting pitcher Trent Valentine got things off to a good start for the Cats.

The Cats started strong in the 1st Inning with a double from #9 Ryan Edmonson that brought home a run to take a 1-0 lead.

The top of the second for the Loggers saw #22 TJ Byrd slam a ball over the fence for a  home run to tie the game at 1-1.

Bryce Jorgenson took a ball to the back to get on base for the Cats into the second inning. He brought that home after an error by the Loggers resulted in an error and the Cats got to a 2-1 lead.

The Loggers knocked another out of the park as #23 Levi Usher hit it right into the dog park.

The Loggers mounted some serious offence in the 3rd, with a bit of miscommunication that led to another run scoring as the Loggers go up by two.

The Border Cats lit up the fans in the bottom of the sixth inning with a double that brought home two runs to take the lead 5-4.

However, the Loggers countered in the top of the seventh as #23 Levi Usher hit a triple and was brought home by a single by #2 Cody Jefferies. That tied the game at five a side. Then Cole Elder drove a single that put Jefferies to second base.

Jefferies then stole third base. The Cats are getting hit on with the Loggers making four consecutive hits and scoring two more runs to take a 7-5 lead.

On a wild pitch, Brett Hawkins stole second base. With no outs in the top of the seventh #5 Brady Allen hit a single, bringing in a new pitcher for the Cats, #40 Austin Eggleston takes the mound with no outs, and Loggers on 1st and 3rd base.

With a light rain falling, the Cats face a real challenge

On his first pitch, Eggleston was wild that allowed the 4th fun of the inning to score as Bret Hawkins scored. TJ Bird then walked, and Adam Christianson was hit by a  pitch and got to first as the precipitation continued to fall harder.

Another wild pitch by Eggleston advanced the runners to second and third still with only one out.

A myriad of mistakes started with a wild pitch that brought home another run for the Loggers.

The Cat’s bull pen is active. The score is now 10-5, with the Loggers scoring six runs so far this inning. The rain however had stopped.

The Loggers have runners on 1st and 3rd, still only one out, Eggleston is trying to work his way out of a giant hole, striking out Levi Usher for the second out.

The Cats got the third out as Cody Jefferies struck out swinging.

The Border Cats had three batters fly out in the bottom of the seventh leaving the score 10-5 following a six-run inning for the Loggers.

Heading to the ninth after no runs in the eighth the Cats walked two batters, putting runners at 1st and 2nd base. #7 Kyson Donahue who has held the hot bat for the Loggers drove home a run to go up by six. Right away the Loggers got another run on a pop-up fly ball that allowed another runner to score making it a 12-5 lead.

Heading to the bottom of the ninth the Border Cats had a mountain to climb. It was a mountain taller than the Cats could climb tonight.

Wednesday sees a double-header with a game at 11 AM and an evening game at 7:05 pm.