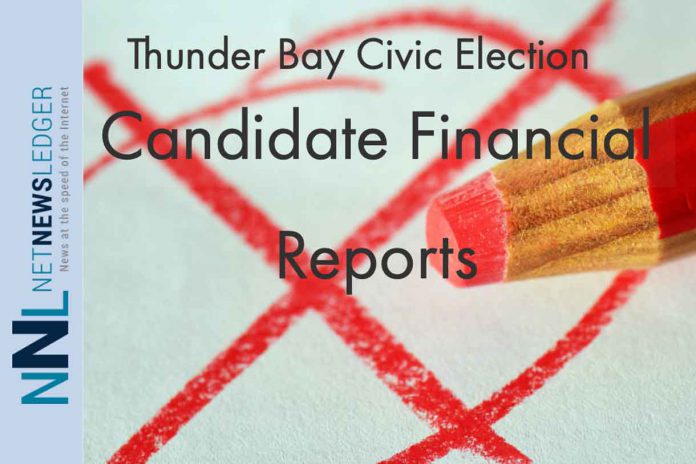 THUNDER BAY – The civic election last October saw a large number of candidates running for office. Each of those candidates had a deadline to meet win or lose following the election.

All registered candidates and Third-Party Advertisers were required to submit their financial statements on the prescribed form to the Office of the City Clerk by 2:00 p.m., Friday, March 29, 2019. Those documents were to be posted online by April 30, 2019.

See all the Candidate filings at: www.tbayvotes.ca

The financial reporting is required under the Ontario Municipal Elections Act and is there to make sure the law is followed and to ensure transparency of election campaign spending and donations.

The majority of the candidates have filed those papers. In the race for Mayor, according to the Elections Thunder Bay website, three candidates, Ron Chookamolin, James Gamble, and Wolfgang Schoor have not filed according to the website Tbayvotes.ca.

Thunder Bay City Clerk John Hannam tells NNL, “A report will be presented to City Council through Committee of the Whole on May 13 detailing those that have failed to comply with the requirements to file campaigns finance forms.

“The penalty for not filing is ineligibility to run for, or be appointed to, any office until after the 2022 general elections and the forfeiture of the campaign nomination fee.”

There are three candidates who ran for Councillor-at-Large who have not filed the needed paperwork: Derek W. Lankinen, Charmaine Mccraw, and Jim Stadey.

Jim Stadey tells NNL, “The 2018 election really opened my eyes to facets of the community I had never experienced before. I know I didn’t win, but the support I found really floored me. I didn’t file on time because I knew if I did, that it would be impossible to resist running again in 2022. I want to dedicate the next 7 years to the people close to me, to my family, my community and to continuing my personal journey as a leader, mentor and advocate. If in 2026 our city has a need for a guy like me, I will swing again, with more experience and resources at my disposal. I will for sure file my financials, I just wanted to be a bit too late.”

Winning McKellar Councillor Brian Hamilton went to court seeking an extension to file his paperwork which he received. Those papers have now been filed.

NetNewsLedger has reached out for comment from other candidates but has not received responses as of publishing this piece. Comments will be added as responses come in.