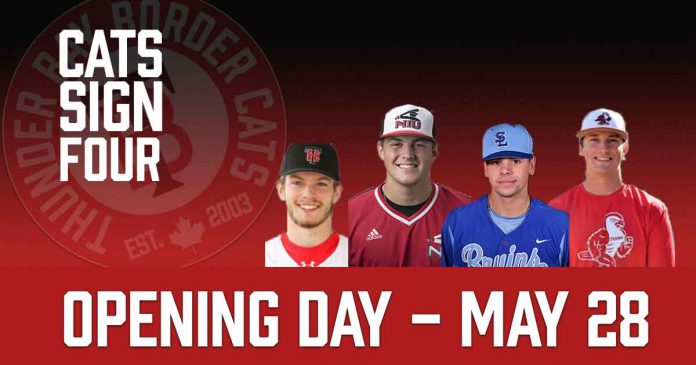 Larson is a 6’2”, 225-pound right-handed hitter, who is in his junior season at Northern Illinois University.  The native of Dodgeville, Wis., has played in 38 games this season and is hitting .250, with two doubles, two home runs and 16 runs batted in.

Brook plays his collegiate baseball at Salt Lake City College.  The 6’0”, 170 left-handed hitting sophomore hails from Spanish Fork, Utah, and is batting .266 with one home run and 20 RBI in 27 games.

Jorgenson, a Thunder Bay product and Hammarskjold High School graduate, has spent parts of the past four seasons with the Border Cats after making his NWL debut in 2015.  The 6’0”, 180-pound utility player is currently a junior at the University of Minnesota-Crookston.  In 39 games with the Golden Eagles this season, Jorgenson is hitting .261 with 13 doubles and nine runs batted in.

Dafoe is in his senior season at Friends University in Wichita, Kan.  The 6’3”, 195-pound right-hander from Lake Havasu, Ariz., has made 12 starts on the mound this season and is 5-6 with a 5.03 earned run average.  Dafoe has pitched three complete games with one shutout and has struck out 76 batters in 78.2 innings of work.

The Border Cats open the 2019 regular season on Tuesday, May 28, at 7:05 pm against the Duluth Huskies at Port Arthur Stadium.  Season tickets are on sale at the stadium box office and single-game tickets go on sale May 1.