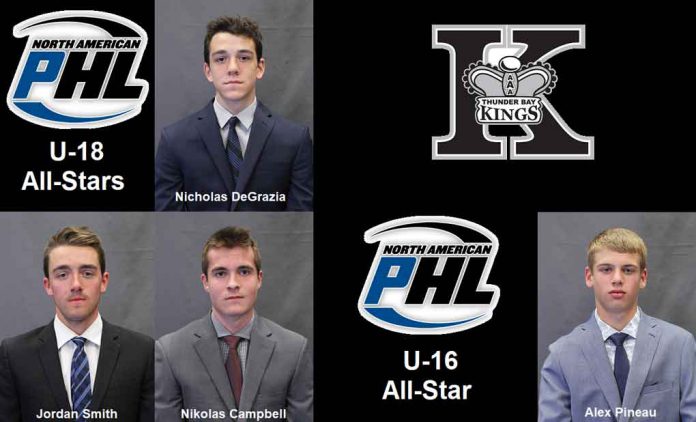 The NAPHL-champion under-18 Kings, who are also hosting the TELUS Cup Canadian National Midget Hockey Championship, April 22-28, at the Fort William Gardens, saw three of its players selected to the U-18 Elite all-star squad, in forwards Nikolas Campbell, Nicholas DeGrazia and goaltender Jordan Smith.

Campbell and DeGrazia finished second and third respectively in NAPHL scoring averaging over a point-per-game for the squad.

As for Smith, he finished second in the league in goals-against average with a stingy 1.31 mark and also boasted a .926 save percentage.

He was even better in the NAPHL Dixon Cup playoffs, sporting a 1.00 GAA and .957 save % in helping backstop the Kings to their first-ever league title.

As for the under-16 Kings, Alex Pineau was named to the U-16 Elite all-star quad on defence.

He helped bolster the club’s defensive corps and chipped in with 10 points in finish in a tie for sixth in offensive production among U-16 rearguards.