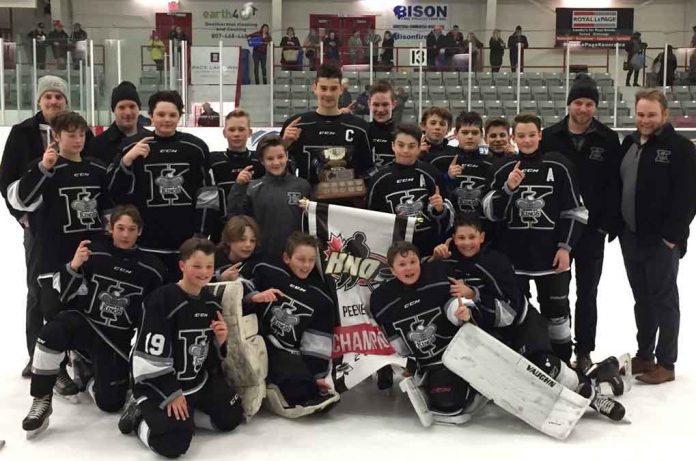 KENORA – A Mason Bazaluk marker during a two-man advantage, 13 minutes into the first period, proved to be the game-winner as the Thunder Bay major midget Kings went on to defeat the Kenora Thistles 4-1 Saturday afternoon in Game 2 of the Hockey Northwestern Ontario AAA midget District Championship at the Kenora Recreation Centre.

Saturday’s tilt saw the Kings strike early with Nikolas Campbell connecting on the power play to put the visitors on the board.

Picking up a two-man advantage, Thunder Bay went up 2-0 with seven minutes left in the opening frame as Bazaluk finished off some crisp passing deep in Kenora territory.

The Thistles cut into the deficit in the back half of the middle stanza thanks to a power-play marker of their own off the stick of Dylan Bertrand to bring his side to within one entering the third period.

It stayed that way until the late going in the third when Mackenzie Sedgwick added some insurance for Kings in the final minute.

Bazaluk then secured the road triumph with an empty netter to round out the day’s scoring.

Jordan Smith recorded the win in goal for Thunder Bay.

The winner of this series will head to Tisdale, Sask., for the TELUS Cup West Regional, April 4-7.

Week-long TELUS Cup ticket packages can be obtained through HockeyCanada.ca/tickets.

Cost for adults for the complete 19-game ticket package is $89 and $67 for youth.

Volunteers are still required for a number of positions for the nationals. Those interested are invited to go to thunderbaykings.com and select the volunteers’ tab.

They also skated to a 4-1 triumph in the opener Friday in Kenora.

Matthew Lysak had a pair of goals for Thunder Bay in Saturday’s win while Jack Lambert, Owen Renn, Mitchell Vanderwey and Carter Deschamps were among those that found the back of the net.

Chase Furlong was the winning goaltender.

Earning the victory in net for the Kings was Carter George.

Thunder Bay will now move on to represent the region at the All-Ontario Peewee Championship, April 8-12, in Ottawa.

Meanwhile, the AAA bantam Kings will head to Toronto for their provincial event April 1-5.

They were tabbed HNO winners after no Eastern or Western Zone team was fielded to participate in the districts.