SPORTS – Canada (4-1; playoffs: 1-1) played in the men’s hockey bronze medal game at the 29th FISU Winter Universiade and earned a hard-fought 3-0 shutout win over Kazakhstan (5-0; playoffs: 0-2) for Canada’s fifth medal at this Universiade – tied for the fifth most by Canada at any Winter Universiade. In addition, Canada captured its 16th medal in 17 FISU tournament appearances.

Less than 24 hours after a semi-final 5-1 loss to host Russia, the U SPORTS lineup found the reserve and resilience to bounce back quickly to take home a medal after their seventh game in the last ten days in Russia.

“I’m just so proud,” said Canada head coach Kevin Hamlin (Windsor). “Everybody said that we couldn’t play the ‘Canadian way’ here, didn’t see this hockey game. Because there were moments in this bronze medal game where our guys could have folded – they blocked shots, put bodies in the way – doing it the Canadian way. Just couldn’t be any prouder of this group.” 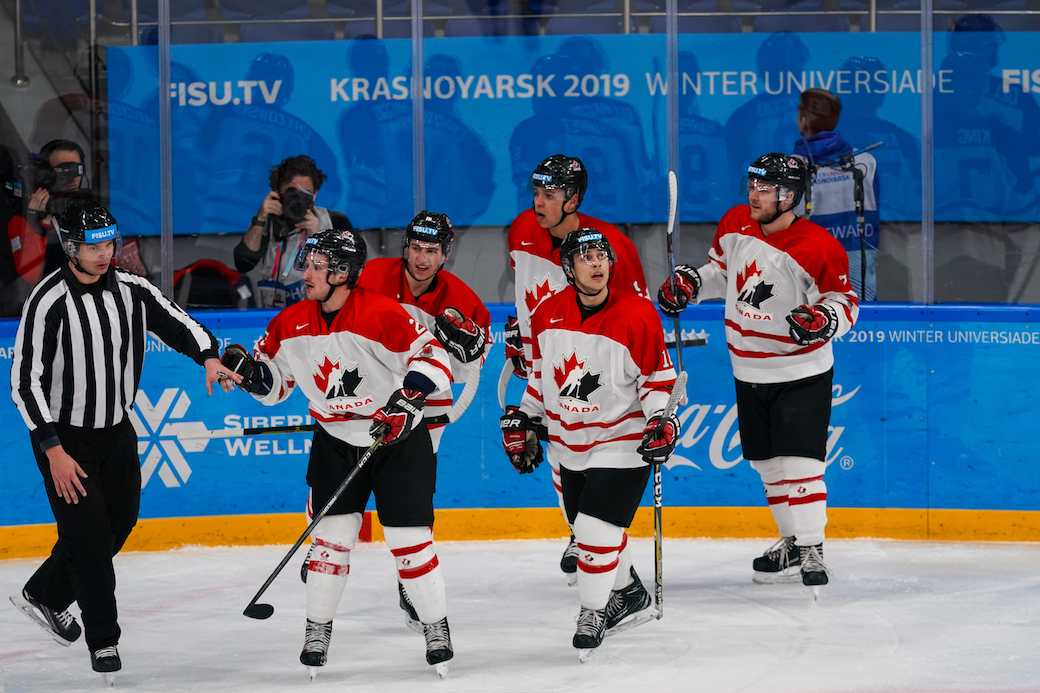 For goaltender Sébastien Auger (UQTR; St-Augustin-de-Desmaures, Que.) this was his second bronze medal at a Winter Universiade as he also was the winning netminder during the bronze game in Almaty, Kazakhstan in 2017. 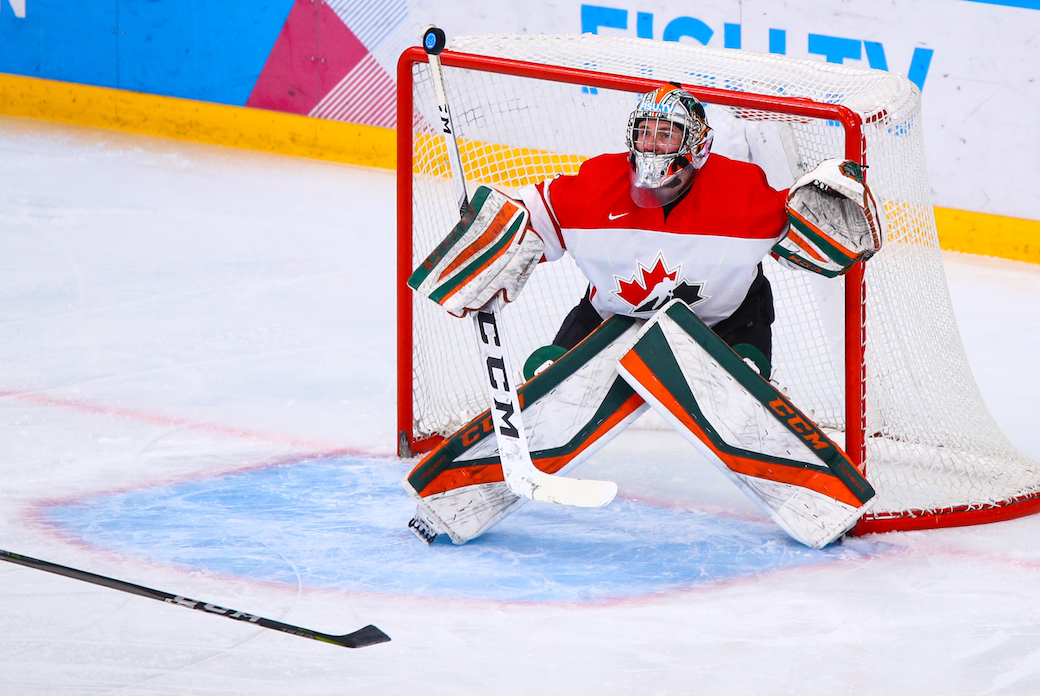 “Great game and the whole team played well in front of me. They didn’t have many scoring chances. It was a great team effort and it feels really good to win the bronze again. It is unbelievable how this group came together in a short amount of time and we will have memories for the rest of our lives,” said Auger after a 39 save shutout performance that also netted him the Canadian cowboy hat given to player of the game, picked by his teammates. 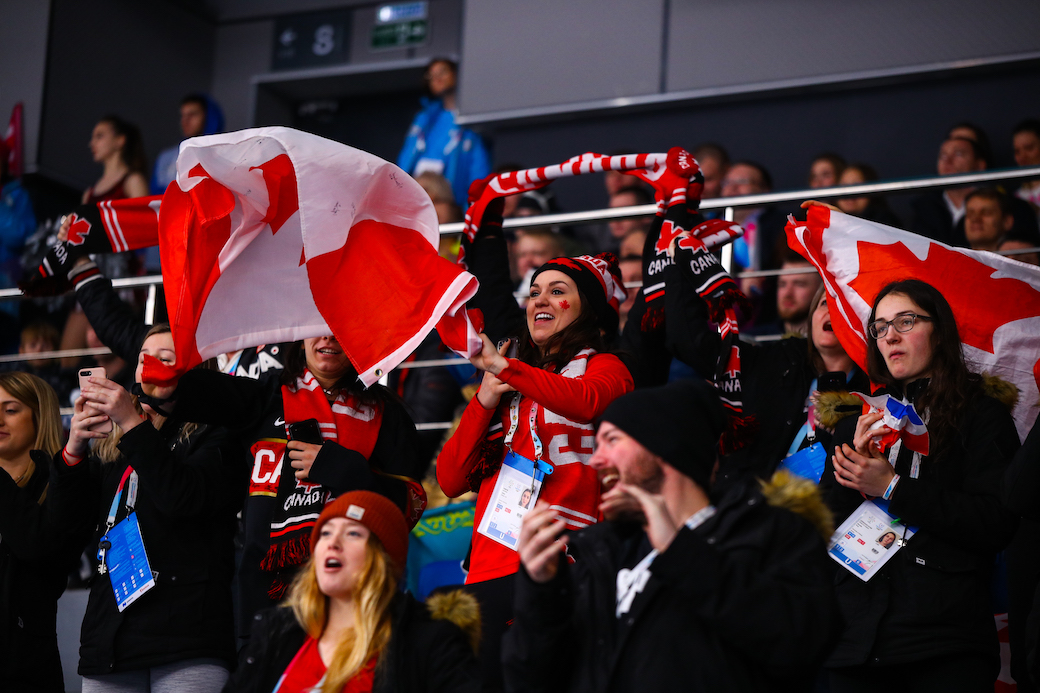 At the beginning of the game, Canada was trying to avoid the slow starts that have plagued this squad throughout the tournament. Kazakhstan did carry some of the play but Canada found their legs by the midway point and seemed to have the best chances in the second half of the opening frame.

Auger was again rock solid with several wraparound saves and not allowing anything by him. The best opportunity for both teams came on a back-to-back play as assistant captain and forward Mathieu Lemay (UQTR; Hawksbury, Ont.) had a min-break from the point a shot wide and the puck caromed off the board and Kazakhstan pounced with a lead pass to spring a mini-break for them which Auger saved with a low pad save with only 35 second left in first. 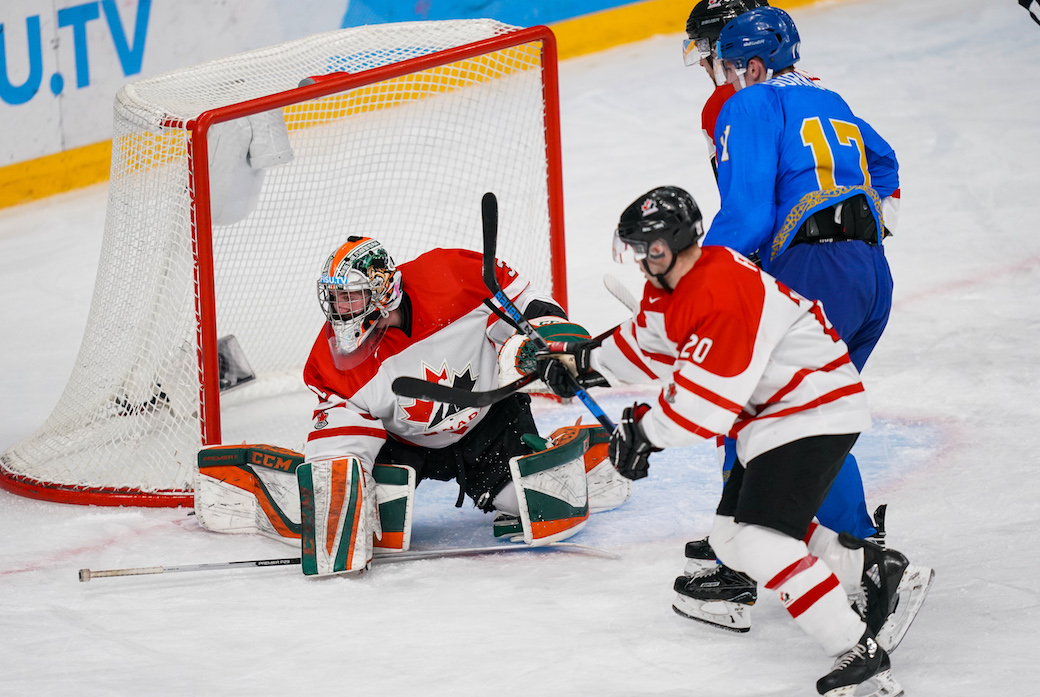 A big second 20 minutes for Canada. They jumped all over Kazakhstan after Auger continued to stand on her head and the offence kicked in for the maple leaf squad. Off a blocked shot from forward Jack Patterson (UOIT; Bedford, N.S.), forward Aidan Wallace (Toronto; Toronto, Ont.) glided in and roofed it top shelf for the game’s first tally at 6:50 in the middle frame. Only 42 seconds later, forward Daniel Del Paggio (Lakehead; Thunder Bay, Ont.) was left alone in the slot and lifted a puck over the defenceless Kazakhstan goalie. Canada led 2-0 and held that advantage despite a push from the opposition in the later minutes. Auger had 29 saves after 40 minutes with numerous close in and tough varieties.

“I was driving down the wing and the puck just found its way to me. I just made a quick shot and such a great feeling to see that going in. We had been working hard the whole game and it was an important goal for sure,” commented Wallace about his game-winner. 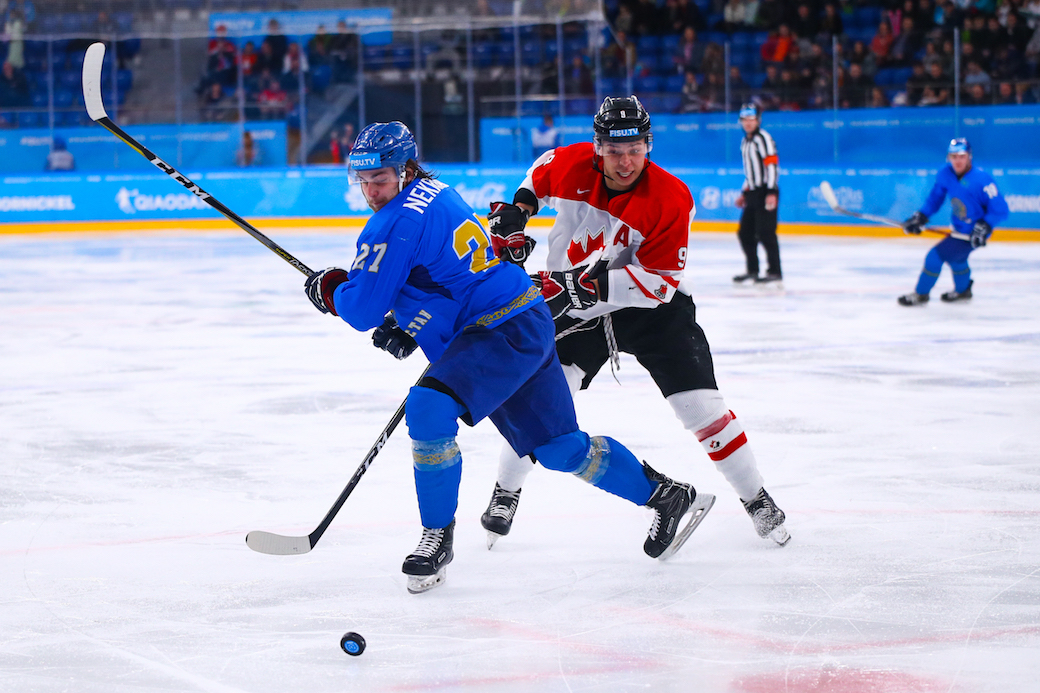 In the third, Canada finally received the first power play of the game but did not convert. Some tense moments before the end. A late penalty, at the five minute mark, had Kazakhstan pull their goalie for a 6-on-4 opportunity but the Canadians found a way to kill it off and then score an empty netter by assistant captain and forward Stephen Harper (Acadia: Burlington, Ont.) with 34 seconds left to start the celebration on Team Canada’s bench.

“Unbelievable! I am speechless. It was a great way to end this tournament and incredibly proud of the boys!, “ exclaimed defenceman Loïk Léveillé (UQTR; St-Jérôme,, Que.). 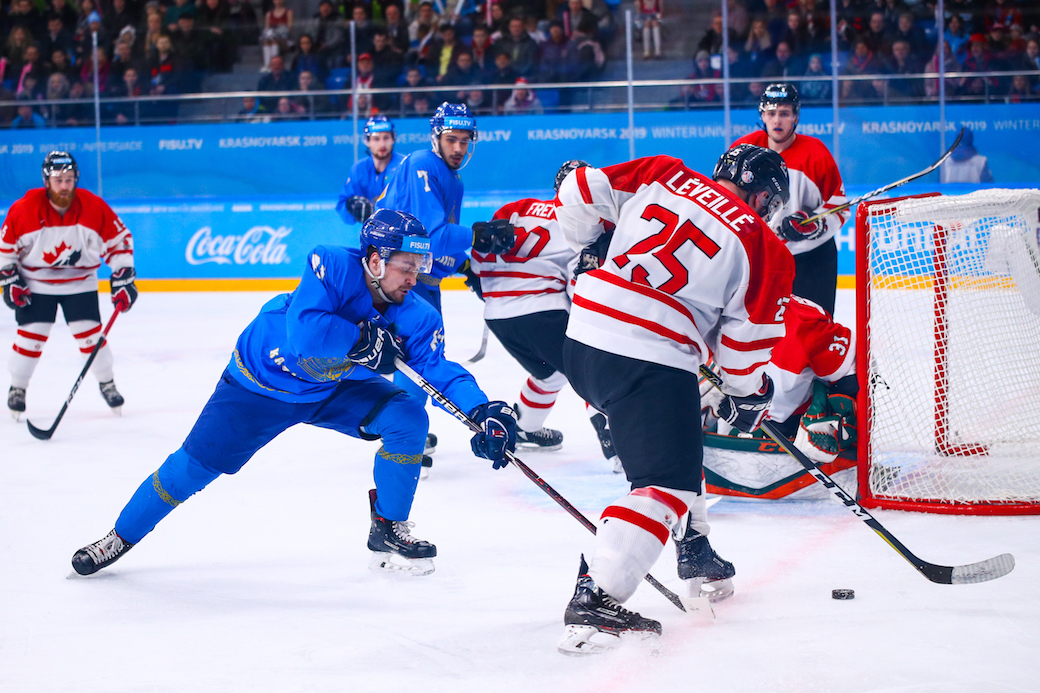 For a team that roster was announced less than three weeks ago, it was a fitting way to end on a winning note.

“It feels great! It has been a great few weeks and I couldn’t be any prouder of the guys,” stated captain and defenceman Liam Maaskant (Acadia; Clinton, Ont.). “I just wanted to say thanks to U SPORTS and Hockey Canada for letting us come here and letting us represent our country. It wasn’t the game we wanted to be in but it was the game we were given. We competed hard and all from the guys in the dressing room to the staff who worked and came up with success in the end.” 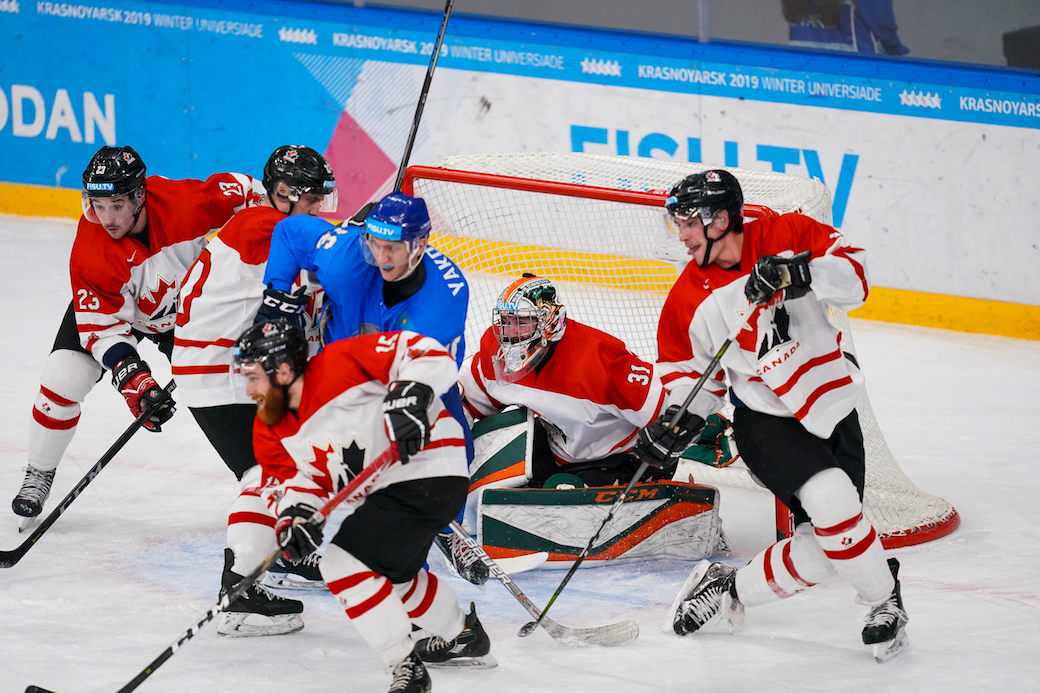