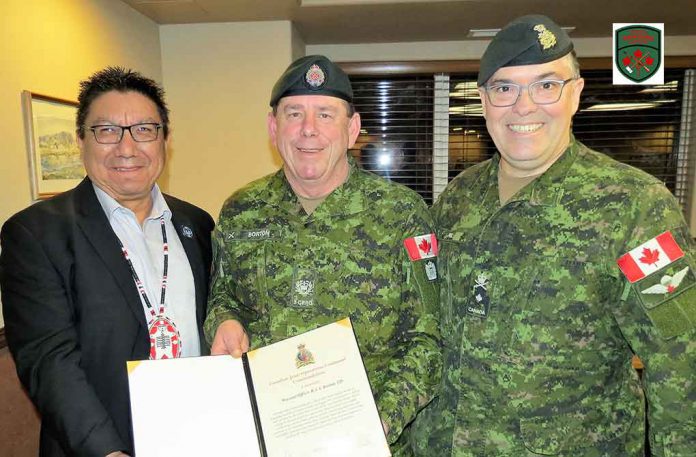 By Peter Moon
THUNDER BAY – Six members of the headquarters staff of the Canadian Rangers in Ontario have been awarded prestigious Canadian Army commendations for preventing youth suicides.

The awards recognize the outstanding service of the six soldiers during a youth suicide crisis in July and August 2017, in the remote Oji-Cree communities of Nibinamik and Wapekeka First Nations in the Far North of Ontario.

“They are very significant awards and they should be worn with pride,” said Lieutenant-Colonel Matthew Richardson, commanding officer of 3rd Canadian Ranger Patrol Group, which commands the 630 Canadian Rangers in 27 First Nations across Northern Ontario.

The commendations were presented by Brigadier-General Jocelyn Paul, commander of 4th Canadian Division, which commands the army in Ontario, and Grand Chief Alvin Fiddler of Nishnawbe Aski Nation. General Paul, a member of the Huron-Wendat First Nation in Quebec, is the highest ranking Indigenous member of the Canadian Armed Forces.

Canadian Rangers and army instructors flew to Nabinamik and Wapekeka in 2017 to operate around-the-clock patrols to prevent children from killing themselves. There were no deaths while they were in the communities. It was the first time a Canadian military unit had ever undertaken such a mission.

Warrant Officer Wolfe flew to Nibinamik where, his award citation said, “he engaged the community in training activities, led night patrols to prevent further attempted suicides, and continued to work with the Band Council after the departure of the main Canadian Ranger contingent. Moreover, he also helped contain a fuel spill from the community’s main generator, preventing it from contaminating groundwater, and assisted in evacuating residents when forest fires later threatened the area.”

Major Ohlke was the operations officer for the Ranger response. “With superb planning abilities, he coordinated the deployment of personnel and material, effectively synchronizing the efforts of military and other government agencies in dealing with a rash of youth suicides and forest fires in the regions,” his citation said.

Master Warrant Officer Borton deployed as a senior team leader to Wapekeka where “he devised an effective approach to bring the crisis under control, coordinating with the Ontario Provincial Police and earning the praise and gratitude of the Wapekeka Band Chief,” his citation said. “(Master) Warrant Officer Borton’s unwavering and selfless dedication and innovative leadership have been instrumental in ensuring the long-term safety of at-risk youth in Wapekeka.”

Warrant Officer Stortz led night patrols in Wapekeka, coordinated with the Ontario Provincial Police and the local community in order to prevent further suicide attempts and to bring the crisis under control. “Through his unwavering dedication and exemplary leadership, Warrant Officer Stortz has been instrumental in ensuring the long-term safety of at-risk youth in Wapekeka,” his citation said.

Warrant Officer Thomson was cited for establishing a base of operations at the school in Nibinamik, engaging in outreach with the community and youth at risk, working with the band council and local police, and ensuring that at-risk youth obtained the mental health support they needed.

Warrant Officer Kirke was cited for his “unwavering dedication and outstanding leadership” during the operation.