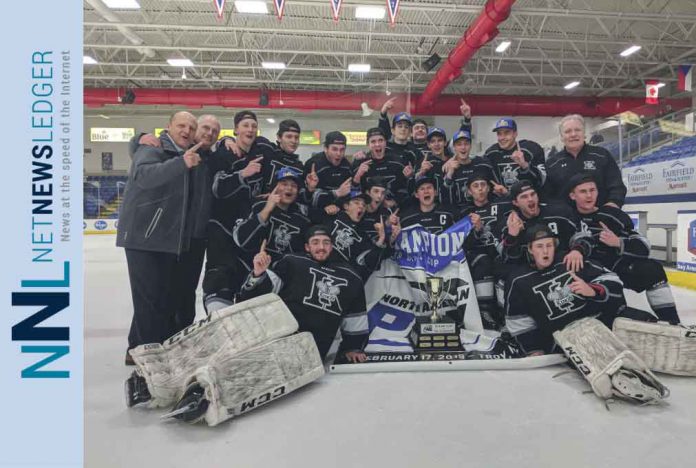 THUNDER BAY – After being crowned North American Prospects Hockey League under-18 champions over the weekend, the Thunder Bay major midget Kings made history.

The Kings became the first Canadian team to capture a title in the 10-year history of the NAPHL in either the U-18 or U-16 divisions.

Thunder Bay claimed their first-ever title after running the table and finishing 5-0 in the NAPHL Dixon Cup playoff tournament, highlighted by a 5-2 victory over previously unbeaten Meier AAA of Western Michigan in the championship game at USA Hockey Arena in Plymouth, Mich.

Backstopped by netminder Jordan Smith, who went 3-0 with a stingy 1.00 goals-against average, he also topped all NAPHL U-18 goalkeepers with a solid .957 save percentage.

Thunder Bay’s other stopper, Eric Vanska, only allowed five tallies to get by him in a pair of victories.

Meanwhile, a well-balanced offensive attack saw 13 skaters supply at least two points over the course of the weekend.

Both of the goals Veneruzzo scored were game-winners with Mason Bazaluk, Mackenzie Sedgwick and Morriseau, with the difference maker in the final, adding the others.

In NAPHL regular season play, Thunder Bay finished with a 13-6-1-1 record before going on their unbeaten postseason run.

Campbell led the club offensively there and finished second overall in league scoring with 26 points while DeGrazia was just behind him with 24, including a team-high 14 tallies.

Between the pipes, Smith went 8-2 and was second among NAPHL goalkeepers with a GAA of 1.31.

With the Kings initial NAPHL title secured, the club now shifts their focus to wrapping up Lakehead Junior Hockey League play over the next two weeks before gearing up for the Hockey Northwestern Ontario AAA District Playdowns vs. the rival Kenora Thistles.

That best-of-five affair starts March 15 in Kenora for games one and two before shifting to Fort William First Nation Arena for the remainder of the series the following weekend.

The HNO champion with then head to Tisdale, Sask., for the TELUS Cup Western Regional April 4-7.

Regardless of the outcome in either the districts or potentially the regional, Thunder Bay knows they will take to the ice at the Fort William Gardens later in April as they host the TELUS Cup Canadian National Midget Championship, April 22-28.

TELUS Cup game ticket packages and volunteer information are both available via the club’s website at thunderbaykings.com.