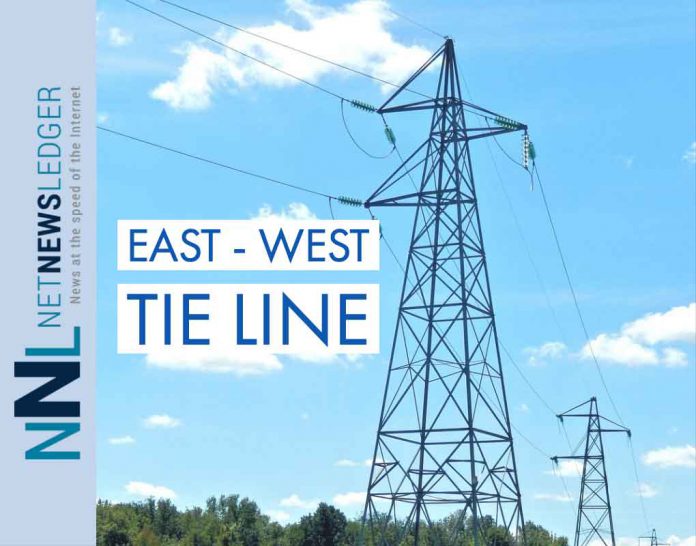 THUNDER BAY – BUSINESS – Following a successful conclusion to the construction of the East-West Tie Line, the Common Voice Northwest Energy Task Force is now celebrating a decision by the Ontario Energy Board (OEB) to correct a historical barrier to getting power to new mines and mills in Northwestern Ontario.

For many years, the Energy Task Force has advocated to the Ontario Government and the OEB to change the assignment of costs for the upgrading of distribution and transmission lines to reflect a fair share approach.  This week, OEB announced a number of cost allocation changes including four areas that the Energy Task Force identified to reflect the specific needs of the Northwest.

“Recently, Greenstone Gold tried to get the transmission line that connects the Municipality of Greenstone upgraded to power the new mine but was told they had to pay for 100% of the cost of the upgrade to replace the existing service for the community as well as increase the capacity required by Greenstone Gold,” said Iain Angus, Co-Chair of the Energy Task Force. “The high cost of this overall upgrade, which would benefit the entire Greenstone Area, including First Nations, was so excessive that Greenstone Gold determined that it was more cost effective to construct its own gas-fired generating station instead.”

“These changes will assist the Northwest in moving its economy forward by reducing the investment needed to get new mines and mills up and running,” said Wendy Landry, Chair of Common Voice Northwest and President of the Northwestern Ontario Municipal Association (NOMA).

The Energy Task Force, through the Northwest Associated Chambers of Commerce and with the financial backing of the Northwestern Ontario Municipal Association (the NOACC Coalition) engaged the legal firm of Weilers Law to represent the region before the Ontario Energy Board. The process to review the Transmission and Distribution System Code has been ongoing since 2016, with a decision rendered this week. It is expected that all costs for the intervention will be recovered through the OEB.

Landry also noted that the role of Common Voice Northwest continues to be that of a public policy research entity that examines Northwestern Ontario issues and puts forward solutions that will improve the economy of the region. “We continue to work with our Municipal and Chamber partners to advocate on the issues and solutions that Common Voice Northwest identifies maintaining a single voice on behalf of the area,” she said. “This is a classic example of the significant research conducted by the Energy Task Force, led by its Co-Chair’s Iain Angus and Larry Hebert, that has led to yet another major change in government policy. It also reflects the legal expertise of Weilers Law in taking these and other energy matters to the Ontario Energy Board.”

Thunder Bay Chamber of Commerce President Charla Robinson agrees: “The work of Common Voice Northwest is crucial to researching the barriers to growth and identifying reasonable solutions that will work for the Northwest. Area Chambers are pleased to have been a key partner in this effort before the Ontario Energy Board.”

The following are the specific changes announced by the OEB and advocated for by the NOACC Coalition:

 Where a transmission connection investment also addresses a broader network system need (e.g., reliability), the costs associated with such investments would be apportioned between the load and/or generator customer(s) that caused the need for the connection investment and the transmission network pool (i.e., all ratepayers), based on the proportional benefit between the connecting customer(s) and the overall system.

 A capital contribution would be required from embedded distributors and large commercial and industrial (C&I) load customers of distributors, where they cause and benefit from investments in upstream transmission connection facilities, based on their incremental load requirements.

 Where a connection asset requires replacement at its end-of-life (EOL), the Codes would be modernized to reflect that wires replacement would need to be determined to be the optimal solution. Where that is the case, cost apportionment between a load customer and all ratepayers[1] would differ based on the circumstances as follows:

– Where the replacement is the same capacity (i.e., like-for-like) or right-sized to lower capacity, the customer would not be responsible for any replacement costs

– Where the replacement involves an upgrade, the customer would be responsible for only the incremental cost; i.e., the amount that exceeds the cost of a like-for-like replacement – not the full cost

 A regional distribution solution would be facilitated, where more than one distributor is involved and it would avoid a more costly upstream transmission connection investment, so that the most cost-effective wires investment in a regional infrastructure plan (RIP) can be implemented

 Other changes involved proposed amendments to address inconsistencies between, and gaps within, the Codes. The proposed changes focused primarily on aligning the DSC with the TSC. Key considerations include improving alignment with the beneficiary pays principle, consistent treatment of customers across the numerous distributors in Ontario and the evolution of the distribution system (as the functions it performs are becoming more similar to those of the transmission system).