Home News International News Women March in Solidarity and Unity – and in Canada in Frigid... 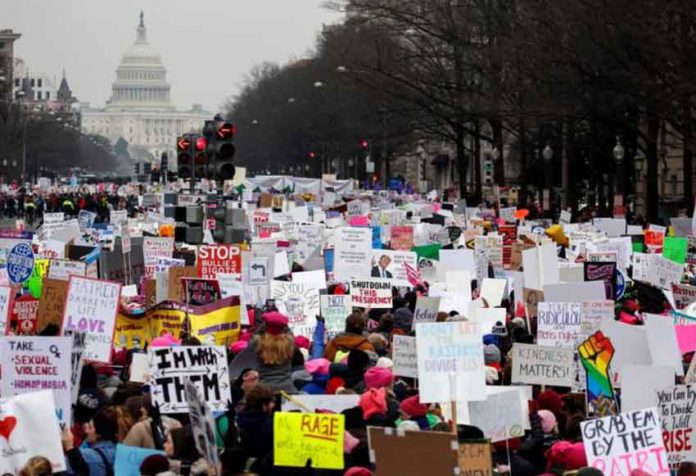 THUNDER BAY – January 19th saw women across North America and around the world on the march. The marchers walked in solidarity for equality, respect and to empower future generations

From coast to coast women rallied and marched to raise awareness of women’s issues. Cold weather in Canada and the northern United States didn’t deter women from the cause. In Saskatoon with a blistering wind chill of -36c dozens of women gathered.

In Winnipeg, despite the cold, the Walk was a success.

Thank you to the speakers and organizers and to everyone who attended the Winnipeg Women’s March 2019. It was -27C and -40 with the wind chill! #womensmarch #mbpoli pic.twitter.com/gdzUgCO39c

In Saskatoon hundreds came out. The Mayor participated.

-36 wind chill didn’t stop the Saskatoon women’s march to end gender based violence this morning. This work is as important as ever, thank you to the organizers and all of those who came out to support! #yxe #WomensMarch @womensmarchSask pic.twitter.com/70JUMmQ9sj

Bitter Cold in Regina did not deter people from participating.

In Ottawa, Thunder Bay-Superior North MP Patty Hadju walked with the women and their supporters.

In Montana, the Walk was Hosted by Local Indigenous Organizers

No Missoula #womensmarch today. Instead Native organizers put together a vigil for missing and murdered indigenous women and girls. #MMIW #nativeled pic.twitter.com/73lHTib1z7

(Video) the whole of #WomensMarchBerlin passing Lustgarten in a quick timelapse. Thousands marching for intersectional #feminism and to #EndPatriarchy.#WomensMarch #berlin #b1901 #mybodymychoice @ProChoice_DE @DemsinBerlin pic.twitter.com/2HarIkO0qb