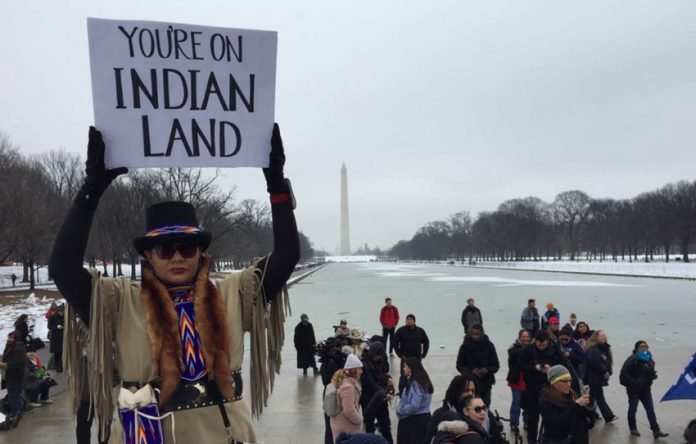 Native groups are struggling with land encroachment by governments and logging, mining and agribusiness companies.

WASHINGTON – (Thomson Reuters Foundation) – Indigenous people from across the globe gathered in the U.S. capital on Friday for a march drawing attention to social and environmental injustices against indigenous communities worldwide, in what organizers said was a first-ever event.

Coordinators said more than a thousand participated in the Indigenous Peoples March, aimed at raising awareness about systemic problems, including police brutality, violence against women, voter suppression and an “environmental holocaust”.

Up to 2.5 billion people depend on indigenous and community lands, which make up more than half of all land globally, but they legally own just 10 percent.

Campaigners say native groups are struggling with encroachment by governments and logging, mining and agribusiness companies.

“And we want to make sure that people know we have not gone anywhere – that we are still here. We’re not extinct. We’re right here among you, and we want to share that with you.”

Parallel events took place in other U.S. cities and abroad, said Jesse Phelps of the Lakota People’s Law Project, saying the D.C. march was a “huge step toward the unification and amplification” of indigenous voices.

The march stems from a months-long 2016-17 protest between the U.S. government and the Standing Rock Sioux Tribe over plans for an oil pipeline to cross Sioux lands in North Dakota, said co-organizer Nathalie Farfan, noting that one of Donald Trump’s first moves as president was to approve construction on the project.

“Standing Rock was a traumatic situation, but that was also the first time we saw allies come from all over to help out,” Farfan said.

That type of solidarity-building has been taking place across the globe, according to Victoria Tauli-Corpuz, the United Nations’ top expert on the rights of indigenous peoples, who said she “fully supports” Friday’s marches.

“Indigenous peoples in almost all parts of the world are still suffering from racism and discrimination and gross violations of their human rights, but their persistence in strengthening their movements and communities enabled some of them to succeed in protecting their lands and territories from environmental destruction,” she told the Thomson Reuters Foundation.

Under The Northern Sky ‘We Are Not The Wild West’