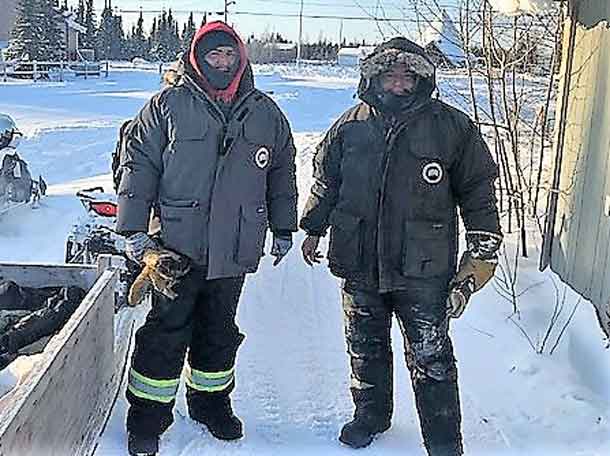 PEAWANUCK – A trapper whose snowmobile broke down near the Hudson Bay coast was forced to walk for four hours in bitterly cold temperatures to reach the shelter of a remote hunting cabin. With gusting winds, the wind chill temperature at the time was -48C.

Members of the small Cree community of Peawanuck became concerned when the trapper, Marcel Metatawabin, failed to return to the settlement on time.

He had last been seen at his hunting cabin, located 72 kilometres north of Peawanuck, by two local residents who were checking their trap lines. They spoke with him briefly and saw him heading north on his snowmobile before they drove back to Peawanuck.

The Ontario Provincial Police were informed of the community’s concerns and requested the assistance of the Canadian Army, which authorized the Peawanuck Rangers to begin a search for Mr. Metatawabin.

“People were concerned for Marcel’s safety,” said Sergeant Matthew Gull, the commander of the Peawanuck Rangers. “He was not back but temperatures were dangerously cold.”

Master Corporal Koostachin headed back to Mr. Metatawabin’s cabin by snowmobile with Mr. Chapman, who volunteered to assist because the local Rangers were either out of the community or unavailable.

They found Mr. Metatawabin in his cabin waiting for rescue. He had no food and had not eaten since the day before. “He was hungry when we got there,” Master Corporal Koostachin said. “We fed him some hot food from cans. We left his snow machine where it had broken down and brought him back to Peawanuck. It was cold. I can only remember being colder on one other time, and that was a rescue, too.”

The two rescuers delivered Mr. Metatawabin to the community nursing station where he was examined and released.

“I’ve done lots of rescues with the Rangers,” Master Corporal Koostachin said. ‘It makes you feel good when you can help someone and save a life.”

The rescue was the third time Rangers have gone to the aid of Mr. Metatawabin, who, like many members of his isolated community spends a lot of time on the land hunting, fishing, and trapping. Peawanuck still takes about half its food off the land.

In 2016 his snowmobile broke through the ice on a creek and he had to walk to a hunting cabin in wind chills of about -40C where he was eventually found by a Ranger search party. In 2014 his all-terrain vehicle broke down and Sergeant Gull used his specialized knowledge of the land around Peawanuck to guide a helicopter pilot to where Mr. Metatawabin had been stranded for two days without food.

“His rescue is another example of the Rangers responding to an urgent community need,” said Lieutenant-Colonel Matthew Richardson, who commands the Rangers of Northern Ontario. “This rescue was done in very severe weather and it was done with the volunteer assistance of a former Ranger, Jimmy Chapman. It was a job well done.”