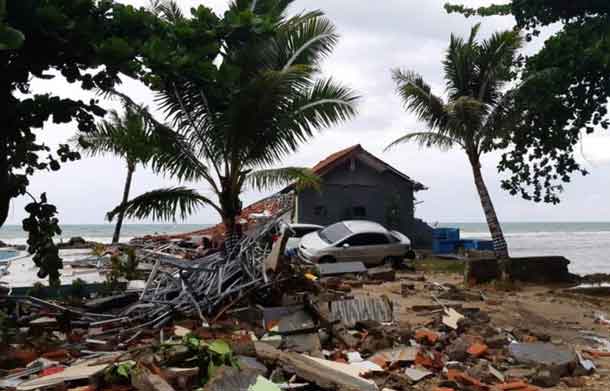 Rescuers used heavy machinery, sniffer dogs, and special cameras to detect and dig bodies out of mud and wreckage

LABUAN, Indonesia – (Reuters) – Indonesian rescuers on Tuesday used drones and sniffer dogs to search for survivors along the devastated west coast of Java hit by a tsunami that killed at least 429 people.

Thick ash clouds continued to spew from Anak Krakatau, a volcanic island where a crater collapse at high tide on Saturday sent waves smashing into coastal areas on both sides of the Sunda Strait between the islands of Sumatra and Java.

At least 154 people are still missing. More than 1,400 people were injured and thousands of residents had to move to higher ground, with a high-tide warning extended to Wednesday.

Rescuers used heavy machinery, sniffer dogs and special cameras to detect and dig bodies out of mud and wreckage along a 100km (60-mile) stretch of Java’s west coast and officials said the search area would be expanded further south, following the discovery of washed away bodies.

“There are several locations that we previously thought were not affected,” said Yusuf Latif, spokesman for the national search and rescue agency.

“But now we are reaching more remote areas…and in fact there are many victims there,” he added.

Authorities said rescuers were working around the clock to reach six villages, currently inaccessible by road and where waves from the tsunami were believed to be as high as five metres.

Earthquakes flattened parts of the island of Lombok in July and August, and a double quake-and-tsunami in September killed more than 2,000 people on a remote part of Sulawesi island.

It took only 24 minutes after the landslide for waves to hit land, and there was no early warning for those living on the coast.

The meteorological and geophysics agency, BMKG, is asking residents to stay away from the shoreline by as much as 1 kilometre, due to the risk of extreme weather on Wednesday and waves up to 2 metres high.

“Since Anak Krakatau has been actively erupting for the past several months additional tsunamis cannot be excluded,” said Hermann Fritz, from the Georgia Institute of Technology.

Rescue efforts were hampered by heavy rainfall and low visibility. Military and volunteer teams used drones to assess the extent of the damage along the coast.

Thousands of people are staying in tents and temporary shelters like mosques or schools, with dozens sleeping on the floor or in crowded public facilities.

Ayub, a 20-year old fisherman sleeping with his family in a tent provided by the military, said conditions camp were not ideal due to the rain, but that they had enough food.

“Everything is destroyed…My boat, motorcycle, house – all of it,” he told Reuters. “The most important thing is we’re alive.”

Other residents of the same emergency camp, like Tarini, a mother of four, told Reuters their families had been left with nothing but the clothes on their backs.

“I’m sad for my children,” she said. “We want things to return to how they were, but we are afraid to return.”

At the nearby seaside town of Carita, which suffered some of the worst losses, local congregations held tearful Christmas vigils for victims.

While many churchgoers have fled the area for fear of further disasters, some like Nikson Sihombing came from temporary evacuation centres.

“We usually celebrate with joy and festivities, but with the tsunami, we can only pray humbly and not celebrate much for this year’s Christmas,” he said.

Destruction caused by the disaster was visible along the coastline where waves of up to 5 metres (6 feet) crushed vehicles, felled trees, lifted chunks of metal, wooden beams and household items and deposited them on roads and rice fields.

Out in the strait, Anak Krakatau (Child of Krakatau) was still erupting and authorities imposed a 2km exclusion zone around it.

BMKG said an area of about 64 hectares (222 acres), or about 90 soccer pitches, of the volcanic island had collapsed into the sea.

In 1883, the volcano, then known as Krakatoa, erupted in one of the biggest blasts in recorded history, killing more than 36,000 people in a series of tsunamis, and lowering the global surface temperature by 1 degree Celsius with its ash. Anak Krakatau is the island that emerged from the area in 1927, and has been growing ever since.

President Joko Widodo, who is running for re-election in April, told disaster agencies to install early warning systems, but experts said that, unlike tsunami caused by earthquakes, little could have been done in time to alert people that waves were coming.