THUNDER BAY – Eighteen-year-old Thunder Bay born singer-songwriter CAPRI is coming home. The musical artist finished high-school and has been busy writing and recording in Toronto with producers and co-writers to release her official debut EP this spring. She has now caught the eye of Record Labels who are requesting to see a sample of her live show. “I want to give my friends and family back home an opportunity to see my live show and hear my upcoming releases before I show the world. There is a sense of comfort in doing that back home first. Everyone has always been so supportive of my dreams.” 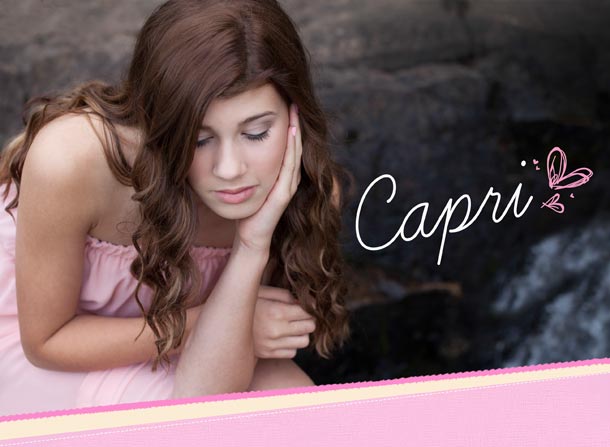 A defining moment for CAPRI was back in 2012. “I remember when I wrote “HOPE” for my mother who was battling breast cancer. I was 12, and never thought anyone but my family would hear it.  When Nelly Furtado heard the song, she arranged to bring me on stage with her at the Community Auditorium, where I got my first taste of what it would be like to sing for thousands of people screaming your name. I just knew that there was no other path for me. I was made to do this.”

The big show is this Friday, December 21stat NV Nightclub. Doors open at 8 pm. There is an incredible line up of Canadian talent as a part of the event called “THE BLACKOUT”, an all-black attire event celebrating the night of the Winter Solstice, the darkest night of the year. Thunder Bay’s own comedian Kris Labelle is coming in from Calgary. Rapper Dele-O is coming in from Winnipeg, and Thunder Bay’s Ryan MacDonald, lead singer of the Honest Heart Collective is doing a special number with CAPRI. As part of her live show, she has her back up dancers from Toronto: Molly & Alessia, one who is currently a Raptors dancer, and the other who has just finished the I Heart Radio Jingle Ball. Tickets are only $10 at www.CapriOfficial.com

BIO: Capri, the 12-year-old singer-songwriter whose “Hope” video went viral in 2012 after she wrote it for her mother who was battling breast cancer, has since finished high school in Toronto and is ready to start her professional music career. Not surprisingly, the 18-year-old’s new single, “Be Okay,” is another lyric to help provide hope to others.

Produced by Lantz (Jazz Cartier), and co-written with artist Wllla, “Be Okay” is about Capri’s struggle with an eating disorder, bulimia nervosa.  “I should be able to control this / but then it takes me and it makes me hates myself/ I can’t escape,” she sings in the pop song with a hip-hop edge.

“I think it will help a lot of people going through similar situations because it’s not something that’s talked about much,” says Capri, who is currently in treatment at North York General Hospital.

Capri has gone through a lot in her young life and uses music as a way of communicating her pain.

Born in Thunder Bay, Ontario, she has been dancing competitively since the age of 3 and singing on stages since she was 8.  A year later, the guitarist and piano player started writing songs about love or even sitting in a bar that she had not yet experienced. “I used to observe others and write about things that they were going through,” Capri remembers.

She performed locally, while also travelling to New York and Los Angeles to train at a higher level in acting, dance and vocals. When her mother got cancer, the 12-year-old used songwriting as her diary, writing the song “Hope.” She played it for her vocal coach, who urged her to perform it at a recital, and they posted it on YouTube.

The clip went viral all over the world, earning millions of views collectively, embedded on sites and via YouTube.

“That’s when I realized that is what I wanted to do. Seeing messages every day and knowing my music had such an impact on others gave me such strength,” Capri says.

They made a music video for the song and she ended up doing radio and TV interviews. Grammy and Juno award winner Nelly Furtado saw the video and had her management team reach out to her to sing with her in front of a massive Thunder Bay audience.  “Being on that stage gave me a taste of my dream,” Capri says.

The following year, Capri got accepted to the prestigious Etobicoke School of the Arts in Toronto, and her family uprooted so she could double major in both musical theatre and dance. Through the school, she auditioned and landed a role as a musician on the Canadian Disney, Netflix and Family Channel drama Backstage.

Being in a new city, making new friends, having her parents’ divorce and struggling with a long-distance relationship with her father, led to more song- as- diary-entries.

She went through depression for a period of time and dealt with anxiety, which she still goes through today. Many of her songs at the time were deep and dark, with titles like “Dead To Me.” But now her lyrics lean towards an exercise in self-help.

“Writing it makes me feel that I’m not alone and I want other people to feel the same way because with ‘Hope,’ I remember I would get messages that the song helped them so much. To this day, six years later, I’m still getting messages,” Capri marvels. “My goal, in life, through my music, is to help people remember what they’ve been through, but also forget what they’ve been through.”

A Night of Hope in Thunder Bay

Capri Hosts A Night of Hope on October 1st