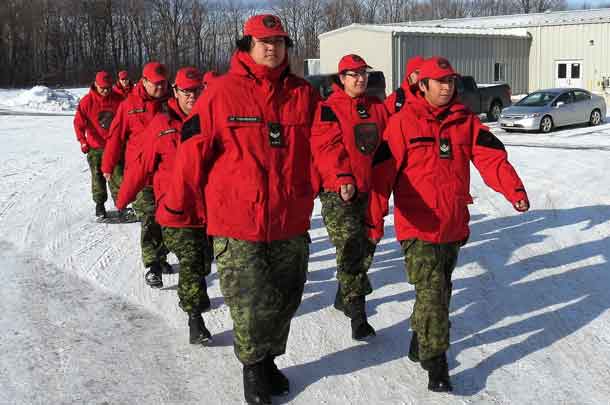 By Peter Moon
THUNDER BAY – Canadian Rangers from 14 First Nations from across the Far North of Ontario have completed nine days of intense training.

They trained in two groups. One was a basic leadership course for Rangers who want to become patrol leaders and the second was for the benefit of established local patrol leaders. “It worked well,” said Captain Karl Haupt, the Canadian Army officer in charge of the training. “They are taking a lot home with them to make their patrols more efficient.”

The training took place at the 4th Canadian Division Training Centre at Meaford, near Owen Sound. In Northern Ontario, there are 570 Rangers in 25 remote and isolated First Nations. The Rangers are part-time army reservists.

Ranger Danielle Bekintis of Sandy Lake, who was in the basic patrol leadership group, said it was the first time she has taken a training course outside of her remote community “It was tiring and they kept us busy and each day we had a different subject.,” she said. “It was hard work but I enjoyed it.”

“The learned how to talk in front of people, how to give direction and give a briefing,” Captain Haupt said. “They are not used to doing that but by showing them that they can do it helped build up their confidence. We gave them a better ability to plan, a tool that they can use for taking complex tasks and getting them done efficiently.”

The second training group consisted of sergeants, master corporals, and corporals who run the Ranger patrols in their communities. They held discussions in which they talked about a wide range of issues amongst themselves and with Canadian Army instructors.

“They brainstormed and discussed local issues and ways to deal with them and make their patrols more efficient and independent,” Captain Haupt said. “The idea was to allow the Rangers to take more ownership of their own training and tell us what kind of training they would like and what would work best for them.”

Master Corporal Emily Beardy of Muskrat Dam was part of the second group. “It was a good experience,” she said. “It allowed us to meet Rangers from other communities and learn from them because we all do different things.”

Three highlights of the training occurred at the end of the week. The aspiring leader’s group had to build emergency airstrips in the daytime and at night in difficult snowy conditions. Both groups spent a day on the range firing the new Ranger .308 rifle. And on the last day, they enjoyed a special Christmas dinner with all the traditional trimmings.