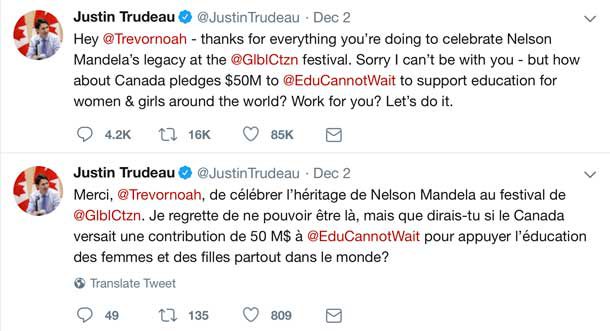 THUNDER BAY – Editorial – I have to admit I was a little surprised by a Tweet from Prime Minister Justin Trudeau. The Prime Minister’s Tweet to Trevor Noah which thanked him for all he is doing to recognize Nelson Mandela’s legacy on the 100thAnniversary of his birth was a pledge of $50 million dollars.

What surprised me were several things, first I have to admit I had no idea who Trevor Noah is. It turns out he is the host of ‘The Daily Show’.

Second, I wondered why the Prime Minister could, in a Tweet pledge $50 million dollars of Canadian tax dollars like he was making a personal pledge to a telethon. I wondered where exactly those funds were coming from; if this had been a budgeted and planned contribution; or if the Prime Minister has access to those kinds of dollars on what on first blush almost seems to be a whim.

Third, I wondered why it continues to appear that this Prime Minister seems so focused on his personal star appeal while he seems equally unfocused on dealing with real issues right here in Canada.

What issues? Here are just a few thoughts

Prime Minister Trudeau’s government has been asked by the Mayors of four Ontario communities to pick up the funding for the Basic Income Pilot Project. There has been no reported answer from the PMO. Could this $50 million be better spent on helping the thousands who signed up for the pilot project?

PM Justin Trudeau’s pledge to Noah Trevor has been the target of political and social comments on Twitter and in the national media. The Conservative leader is accusing the Liberal leader of using Canadian tax dollars in an attempt to impress a celebrity.

Perhaps the goal of assisting in this program for education in Africa is worthy of Canada’s support, but for the Prime Minister to seemingly reach into Canada’s piggy bank and grab $50 million like it was his own personal funds to commit makes the entire effort seem more like it is more about Justin Trudeau and his reputation than it is about helping here at home.