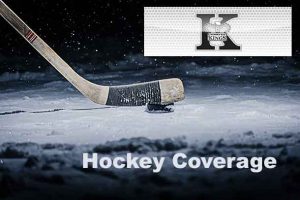 THUNDER BAY – It will be a full round of competition for the Thunder Bay Kings this weekend as all four of their AAA teams will be on the ice in Minnesota.

Both the Kings’ major and minor midget sides will be in Blaine, Minn., for Round 4 of North American Prospects Hockey League action while the bantams will also be in Blaine for the NAHL Future Prospects tournament and the peewees are set to compete in the 42nd annual Spirit of Duluth event.

The Arizona Bobcats provide the opposition for the major midgets under-18 division opener Saturday at noon before they tangle with the Colorado Springs Tigers later in the day at 10:15 p.m.

Sunday has them facing off with the Shattuck-St. Mary’s Sabres at 4 p.m. before finishing up against the Florida Alliance Monday at 9 a.m.

Minor midget action also starts Saturday with a 4:15 p.m. encounter with the under-16 Arizona Bobcats side.

They then have two contests on their slate Sunday starting with Florida U-16 at 2:15 p.m. and finishing with the Nashville Jr. Predators at 8:15 p.m.

Monday’s match-up has them squaring against Pursuit of Excellence from Kelowna, B.C. that features an 11 a.m. face off.

As for Thunder Bay’s bantams, they kick off their tourney Friday with a pair of tilts.

A 9 a.m. meeting with Arizona’s U-14 squads starts the day for them and a 7 p.m. start vs. the Alaska All-Stars concludes it.

They will then wrap-up the round robin portion of their schedule Saturday vs. CarShield AAA from St. Louis at 2 p.m.

Down in Duluth, the peewee Kings will take on a trio of Minnesota clubs, which will determine their playoff round placing.

First up sees them meeting the Elk River Elks at 1 p.m. Friday while they’ll take on the Cloquet Lumberjacks and Edina Hornets Saturday at 9 a.m. and 5 p.m. respectively.