Andrew Foulds will be returning to Council holding the Current River Ward seat. It looks like Shelby Ch’ng will be holding on to her seat in Northwood. Brian Hamilton is likely to be the new Councillor in McKellar Ward. In Westfort it is looking like Kristen Oliver is headed to Council having defeated long-time Westfort Councillor Joe Virdiramo.

NetNewsLedger will call the McIntyre ward for Albert Aiello.

There are two races that are really too close to call. Neebing and Red River.

Political newcomer Cody Fraser is leading over long-time Councillor Rydholm but the paper ballots are showing her climb in totals.

In Red River it has been a slim lead held all night by incumbent Brian McKinnon. 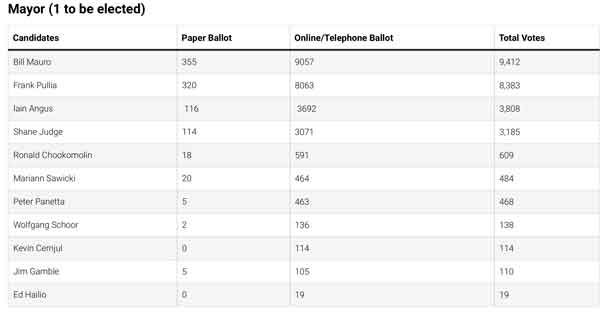 Peng You has a massive lead in the At Large race. 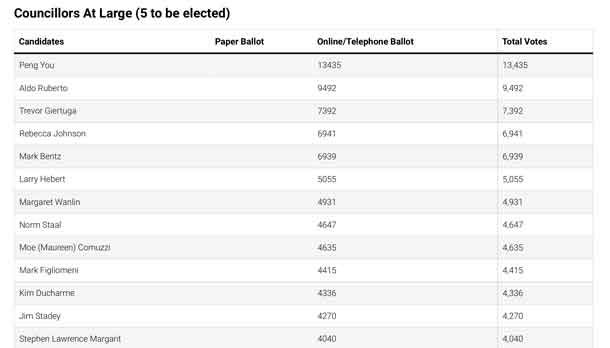 This election, 63 percent of the voting was done online. Overall voter turnout is at 52 percent which is up from that last civic election.

Westfort: Westfort is turning into a two horse race between Kristen Oliver and Frank Scarcello. Incumbent Joe Virdiramo is well back.

Red River: Brian McKinnon is leading over George David Newman with an early lead of just over 100 votes.

UPDATE – 9:30 pm – The City of Thunder Bay computer for reporting results is starting to lag.

John Tory has already been declared elected in Toronto.

The polls have now closed. Results will be in shortly with the electronic voting providing fast reporting. As of 8:10 pm there have been no results posted as yet.

The campaigning is over. Now it is time to find out who will sit on Thunder Bay City Council, and on the school boards in our city.

Coverage will follow through the night as the polls close.

What are the factors in this election?

With the addition of telephone voting and electronic voting, earlier today voter numbers have been reported. Voter numbers in several wards are up. It is hard to tell until the numbers come out if that means voters are looking for a change, or voting to support their candidate of choice. Voter turnout in 2016 was 46% – by 5:00 pm today voter turnout was reported at almost 42%.

Many candidates have spoken of the desire for change they have heard at the doors. Once the results come in then we will see how serious Thunder Bay voters are about that change.

Issues that candidates have shared that voters are concerned over are crime and addiction, taxes, and infrastructure.

This is the first election where third parties have been involved in the Thunder Bay election. It is hard to say until the votes are counted. LEAP – an organization registered as a third party, had endorsed candidates, and campaigned for those candidates. Tonight’s results will see how those endorsements worked out, or not.