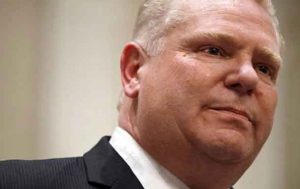 “Canada’s Constitution makes it clear. The province has exclusive responsibility over municipalities,” said Ford in announcing his government’s action. “The Better Local Government Act will reduce the size and cost of government while reducing dysfunction at City Hall. The people who are most vocal and fighting this move are a small group of left-wing councillors looking to continue their free ride on the taxpayers’ dollar and a network of activist groups who have entrenched their power under the status quo.”

Ford announced that his government will immediately recall Ontario’s Legislature and introduce legislation that, if passed, will invoke Section 33 of the Constitution and ensure the Better Local Government Act is preserved in time for the October 22 Municipal Election.

Official Opposition Leader Andrea Horwath is calling Doug Ford’s vow to invoke the notwithstanding clause and suspend part of the Canadian Charter of Rights and Freedoms for Ontarians an unprecedented abuse of power.

“Invoking the notwithstanding clause in a case like this is an unprecedented move, literally suspending the Charter rights of Ontario people in order to plow ahead with his revenge plot against his political enemies at Toronto City Hall,” said Horwath.

“A good leader doesn’t just ask if he has the right to do it, but whether it’s the right thing to do.”

The notwithstanding clause allows a provincial government to suspend a part of the Canadian Charter of Rights and Freedoms for a period of up to five years. Its use is incredibly rare in Canadian history.

Horwath said she not only opposes Ford’s plan to invoke the notwithstanding clause – but also opposes any plan by Ford to use public money to fund an appeal on the court’s ruling, saying it’s wrong to waste more of Ontarians’ money on Doug Ford’s revenge plot. The decision from Justice Edward Belobaba was clear, she said.

“The Province has clearly crossed the line,” wrote Belobaba in his decision, which also stated that “Passing a law that changes the City’s electoral districts in the middle of its election and undermines the overall fairness of the election is antithetical to the core principles of our democracy.”

Horwath thanked Belobaba for his work and all those who gave their time and expertise to the court battle against Ford’s move to meddle in Toronto’s municipal elections.

While Monday’s ruling against the Ford administration was welcome, with Ford’s move to invoke the notwithstanding clause it’s clear that Ontarians standing up for their rights can’t rest, yet.

“New Democrats, progressive Ontarians, and all those that respect democracy and our Canadian Charter of Rights and Freedoms won’t stand for this. In the legislature and in our communities, we’ll speak out and oppose Doug Ford’s attack on our Charter rights and his abuse of office.

“And as New Democrats, we’re going to keep reminding Ontarians that it doesn’t have to be this way. Today, we could be building a province where families have more opportunity to build a great life. We could be improving health care wait times, and rebuilding our children’s schools. There’s no doubt in my mind that’s what really matters, and what we should be focused on at Queen’s Park.”

Ford also announced that his government will immediately appeal Judge Belobaba’s decision to the Ontario Court of Appeal.

“I believe this decision is deeply concerning and wrong and the result is unacceptable to the people of Ontario,” concluded Ford.  “If you want to make new laws in Ontario – or in Canada – you first must seek a mandate from the people.”