TAIPEI CITY, Chinese Taipei (Team Canada) – In front of a near-capacity crowd at Taipei Arena with hundreds of flags waving in support of the host Chinese Taipei, Team Canada women’s basketball lost 76-67 in their quarter-final, one of the highlights of Day 7 at the Taipei Universiade.

From the start the crowd was electric, cheering and waving flags for every turnover or miss by the Canadians, but especially every made basket for Chinese Taipei – which included their go-ahead basket at the buzzer to make 18-17 for the hosts after one quarter.

The Canadians were unable to close the gap as the hosts pushed their lead to six at halftime and heading into the final 10 minutes found themselves down by 10. Chinese Taipei’s slight advantage in shooting percentage ended up making the difference as their 50 per cent from the field compared to Canada’s 41 per cent. The crowd never letting up their support of their home country seemed to help as well.

“The place was jammed and every time they scored you couldn’t even hear yourself think – it was insane,” said Keough. “It gave Taipei a bunch of momentum. I thought we fought hard right until the end, we just came up short. The third quarter they were hitting every shot. We would close out, had our hands down and it didn’t even matter if we were right in front of them, they were shooting and got hot in the third quarter when they pulled away.”

Canada’s scoring was evenly distributed as Keough, Alex Kiss-Rusk (McGill University) and Paige Crozon (University of Utah) each finished with 10 points. The red and white’s Abigail Fogg led the team with 13 boards, while adding six points.

Canada will now play the United States on Saturday, August 26 at 5:30 a.m. Eastern time in the first of two 5-8th place games. 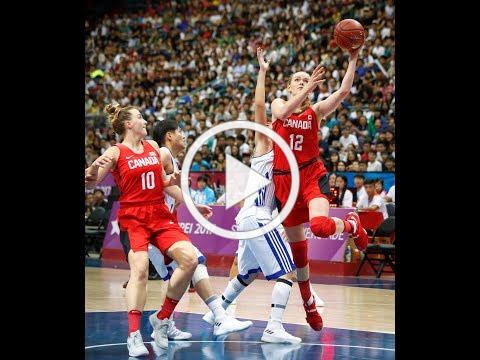