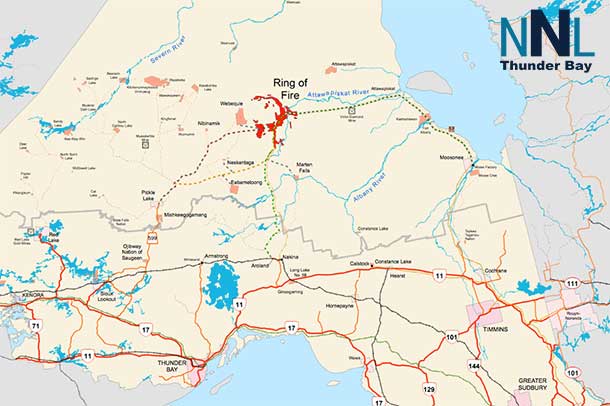 THUNDER BAY – Leaders from Webequie and Nibinamik First Nations are clarifying their position for community members and neighbouring communities following the recent announcement by the Province of Ontario with Premier Kathleen Wynne.

“Webequie First Nation is collaborating with Nibinamik First Nation through an existing bilateral agreement to address our infrastructure needs for the benefit of our people and region. Land Stewardship and environmental protection will be a priority for the people of Webequie First Nation, as it is our inherent right stemming from our three tier land base model to implement benefit relationship agreements with both levels of government. The success of the related project development in the Ring of Fire is dependent on the immediate implementation of the statement of joint commitments developed with the province to work with the community on various jurisdictional matters,” says Chief Cornelius Wabasse of Webequie First Nation.

The two participating First Nations have signed a Joint Community Access Infrastructure Planning Agreement to collaborate on a specific study that could potentially bring a multi-purpose corridor to its communities and the Northern Ontario region. A multi-purpose corridor could connect the two communities to existing regional infrastructure and potential future developments.

The feasibility study of a multi-purpose corridor by the two First Nations will narrow the proposed ten-kilometer wide conceptual routes to a two-kilometer wide route and will determine any environmental constraints and future environmental considerations. The proposed multi-purpose corridor will be routed from the provincial highway to the two First Nations and could accommodate infrastructure such as roads, transmission lines, and broadband cable. This new information will support the development of a project description early in the new year that will inform the approach to an environmental assessment.

The study is a continuation of the previous road option study completed last year. The two communities will be engaging their membership throughout the technical study as information is generated. The short-term fieldwork is largely visual inspections of water crossings, traditional sites, and environmental sensitive areas and no mechanized activities will be conducted in this initial fieldwork. Both First Nations are interested in any comments, feedback and concerns by its neighbouring First Nations, as well as other interested parties about the proposed conceptual option.

The study will include reviewing a supply road opportunity proposed by Webequie First Nation. The First Nation has been working on its airport redevelopment initiative since 2012, and is examining a possible secondary supply road from its community airport to the potential mine sites. Webequie First Nation is expecting the Government of Canada, specifically the federal responsible authorities, to participate for both on and off reserve planning.

“Our Elders and our ancestors reminded us to never forget our spiritual way of life and to always put our Creator first before we move forward on things.  Our physical parts of our lives are important and the Creator gave us land, water, trees and everything that surrounds us to meet our physical needs.  We have our natural laws that were given to us from our Creator as well as protocols to follow.  There are two sides of life we have to manage with any initiative.  Nibinamik First Nation will move forward in a balanced way,” informs Sheldon Oskineegish, Nibinamik  First Nation Youth Councillor.

“We have been talking about ‘Nishnawbe Omeeneekowin’ or this planning process for a long time and it is now time to demonstrate what Webequie people want versus responding to what government and industry want to do in our homelands. Webequie First Nation is now asserting its inherent rights over its collective destiny as well as its Creator-given preeminent dominion over its traditional lands. Our three-tiered land management structure was informed by our Elders which is based the principle of sustainability for our current members and future generations. Webequie First Nation will now show their; Manitou meeneekoowin’ to create a healthy community (mino beemadiziwin) which will include basic infrastructure.” educates Elder Ananias Spence, Webequie First Nation.