San Jose, California — Apple has issued the beta versions to iOS 11. The company says this is going to be a major update to the Apple mobile operating system. “With iOS 11, we’re delivering the biggest AR platform in the world, and it’s available today for developers to begin building AR experiences using ARKit for hundreds of millions of iPhone and iPad users,” says Craig Federighi, Apple’s senior vice president of Software Engineering. “iOS 11 gives iPad users the powerful app functionality they need to take advantage of everything iPad is capable of, and brings hundreds of new features and incredible updates to the iOS apps iPhone and iPad users enjoy every day.”

The changes will help move the iPad toward being more of a laptop replacement, and position the company to battle the Microsoft Touch.

The new upgrades in iOS 11 will bring new features to the iPhone and iPad.

Apple is working to move more multitasking features to the iPhone and iPad.

This will include the ability to use Apple Pay to make transfers to friends. Apple could be seeking to take on Paypal and Payeneer and increase the company’s reach into secure online financial transactions.

Apple says that for the iPad, this will be their biggest software release ever. 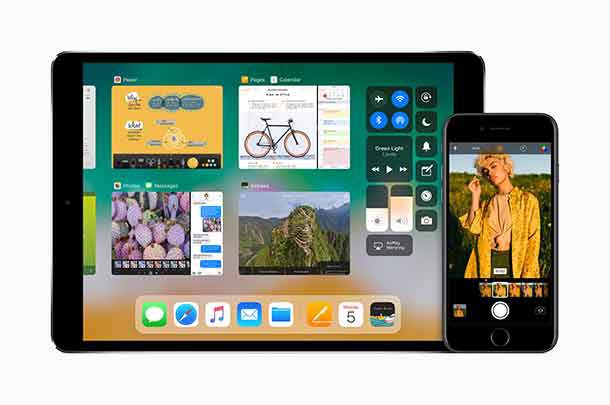 Apple says that they will be bringing new experiences and hundreds of features to iPhone and iPad this fall. iOS 11 is the biggest software release ever for iPad, with powerful multitasking features, the Files app and more ways to use Apple Pencil. Augmented reality is coming to hundreds of millions of iOS devices with a new platform for developers to build apps that let users place virtual content on top of real-world scenes. Core ML gives developers on-device machine learning capabilities so they can easily make apps that will predict, learn and become more intelligent. Additional features include the ability to pay friends using Apple Pay, Do Not Disturb while driving to help users stay more focused on the road, even more intelligence and a new voice for Siri and new professional capabilities to Photos and Camera. iOS 11 is available as a developer preview today and will be a free software update for iPhone and iPad this fall.